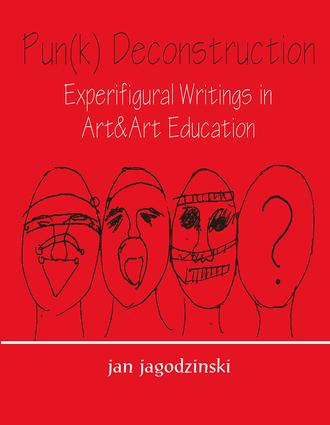 In Postmodern Dilemmas: Outrageous Essays in Art&Art Education and Pun(k) Deconstruction: Experifigural Writings in Art&Art Education, jan jagodzinski presents a series of essays covering a timespan of approximately ten years. These essays chart the theory and practice of art&art education as it relates to issues of postmodernity and poststructuralism concerning representation, identity politics, consumerism, postmodern architecture, ecology, phallocentrism of the artistic canon, pluriculturalism, media and technology, and AIDS.

As a former editor of The Journal of Social Theory in Art Education and a founding member for the Caucus on Social Theory in Art Education, the author attempts to deconstruct the current art education paradigm, which is largely based on modernist tenets, and to reorient art education practice to social issues as developed in both media education and cultural studies. Part of the intent in these two volumes is to undertake a sustained critique of the 1982 Art in the Mainstream (A.I.M.) statement, which continues to be considered as the core value for art education. The distinct intention of this critique is to put forward a new value base for art&art education in these postmodern times.

Many of the essays raise the need to be attentive to sex/gender issues in art&art education and the need to read the artistic discourse "otherwise." There is a sustained critique of the art programs developed by the Getty Center for the Arts, whose arts curriculum presents the paradigm case of late modernist thinking. Some essays are written in a provocative form that tries to accommodate such content. This is particularly the case in Pun(k) Deconstruction, where architectural discourse is deconstructed, and which includes an "artistic performance" given by the author in 1987.

This singular set of volumes combines scholarship in the areas of gender studies, aesthetics, art history, art education, poststructuralism, and cultural studies in a unique blend of theory and practice for rethinking the field of art education.

Contents: Preface. Part I: Questioning Representation. Learning From Sal(l)ad: Redressing the Historical Narrative (1985-1992). On the Impossibility of Men in Feminism: Taking a Hesitant Step Through the Minefield of Feminism in Art and Education (1989). The Question of Representation: The Case of AIDS (1991). Part II: Experifigural Writing. Blue Velvet, or Whatever Happened to 'Presence'?: Postmodernist and Poststructuralist Impact on Arts Education (1987). The Nostalgia of Art Education: Back to the Future, Part 4 (1992). The Nostalgia of Art Education: Reinscribing the Master's Narrative, Part 5 (1994). Part III: The Question of Youth in the Postmodern? The War of Labels: An Art Educator in Search for a Sign (1993). Violence and Generation X: How the New Right is Managing the 'Moral Panic' Through Television and Teen Films (1996).

In this age of multimedia information overload, scholars and students may not be able to keep up with the proliferation of different topical, trendy book series in the field of curriculum theory. It will be a relief to know that one publisher offers a balanced, solid, forward-looking series devoted to significant and enduring scholarship, as opposed to a narrow range of topics or a single approach or point of view. This series is conceived as the series busy scholars and students can trust and depend on to deliver important scholarship in the various "discourses" that comprise the increasingly complex field of curriculum theory.

The range of the series is both broad (all of curriculum theory) and limited (only important, lasting scholarship) – including but not confined to historical, philosophical, critical, multicultural, feminist, comparative, international, aesthetic, and spiritual topics and approaches. Books in this series are intended for scholars and for students at the doctoral and, in some cases, master's levels.