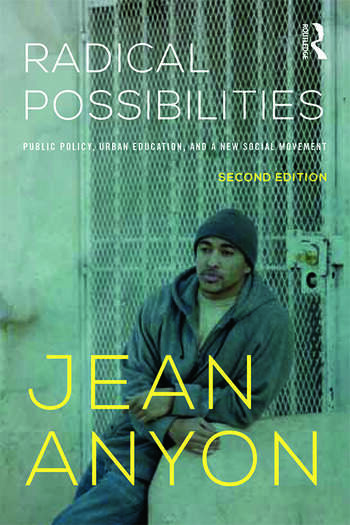 The core argument of Jean Anyon’s classic Radical Possibilities is deceptively simple: if we do not direct our attention to the ways in which federal and metropolitan policies maintain the poverty that plagues communities in American cities, urban school reform as currently conceived is  doomed to fail. With every chapter  thoroughly revised and updated, this  edition picks up where the 2005 publication left off, including a completely new chapter detailing how three decades of  political decisions leading up to the  “Great Recession” produced an  economic crisis of epic proportions.   By tracing the root causes of the financial crisis, Anyon effectively demonstrates the concrete effects of economic decision-making on the education sector, revealing in particular the disastrous impacts of these policies on black and Latino communities.

Going beyond lament, Radical Possibilities offers those interested in a better future for the millions of America’s poor families a set of practical and theoretical insights. Expanding on her paradigm for combating educational injustice, Anyon discusses the Occupy Wall Street movement as a recent example of popular resistance in this new edition, set against a larger framework of civil rights history.  A ringing call to action, Radical Possibilities reminds readers that throughout U.S. history, equitable public policies have typically been created as a result of the political pressure brought to bear by social movements. Ultimately, Anyon’s revelations teach us that the current moment contains its own very real radical possibilities.

Jean Anyon is professor of social and educational policy in the Doctoral Program in Urban Education at the Graduate Center of the City University of New York. She is the author of the best-selling and critically acclaimed Ghetto Schooling: A Political Economy of Urban School Reform.

"A year after her death, this second edition of Anyon's Radical Possibilities continues to trouble the status quo of American education systems that reinforce hegemonically stratified social structures...Anyon's voice is radical, and needs to be heard in the ongoing debate over where the US is headed...Summing Up: Highly recommended. Upper-division undergraduate, graduate, and research collections."- D. D. Bouchard, Crown College, in CHOICE, January 2015

“In this new edition of Radical Possibilities, Anyon makes it clear that the real obstacles to change in urban schools are not lazy teachers, unmotivated students or disengaged parents.  Rather, the roots of the problems confronting urban schools lie in an economic system that perpetuates gross inequality and protects the powerful at the expense of the poor.  She also reminds us that the system can and has been challenged through collective agency and organized resistance.  It is a message of pragmatic optimism that will inform, empower and inspire readers.”—Pedro Noguera, Professor of Education, New York University

“This is a hopeful book for cynical times, a call to action rather than reaction, a call for change that helps the 99% rather than enriches the 1%. Jean Anyon asks us to envision a more equitable future so we can start to create it.”—William G. Tierney, University Professor and Wilbur-Kieffer Professor, University of Southern California

“For over three decades, Jean Anyon has been one of the English speaking world's most powerful intellectuals on the subject of education, and this revised edition solidifies her legacy. The volume is a ‘must read’ for anyone who works to understand and challenge the seemingly intractable relationship between race, class, schooling, and social and economic inequalities in the 21st century.”—Lois Weis, State University of New York Distinguished Professor, University at Buffalo