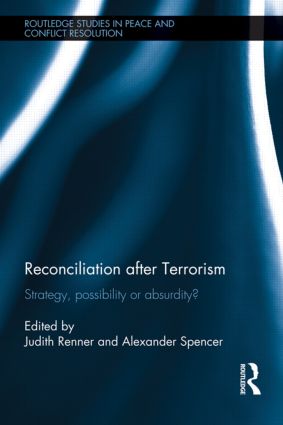 Reconciliation after Terrorism brings together scholars from the hitherto disparate fields of terrorism and reconciliation studies, in order to examine whether reconciliation is a possible strategy for dealing with and ending a terrorist conflict.

Although terrorist activities often play a role in situations of conflict and transition, terrorists are generally not taken into consideration as active participants by researchers and practitioners. In some cases, the terrorists turn into political actors during the reconciliation process and their past is not an issue anymore, as it was the case with the ANC in South Africa. This book examines the notion of reconciliation with terrorists from a theoretical and empirical perspective.

This book will be of much interest to students of terrorism studies, transitional justice, conflict resolution, peace and conflict studies and IR in general.

* * *Reconciliation after Terrorism was featured in the Terrorism Bookshelf: Top 150 Books on Terrorism and Counterterrorism, selected and reviewed by Joshua Sinai. -Perspectives on Terrorism , Vol. 6, No 2, 2012* * *

‘The density of the contributions, the quality and detail of the research involved and the competence of their authors alone turn this book into a very recommendable read for anybody interested in the issue.’ – Georg Grote, Europäisches Journal für Minderheitenfragen, Vol. 5, No. 2, 2012

Judith Renner is a Research Fellow at the Ludwig-Maximilians University, Munich, Germany.

Alexander Spencer is an Assistant Professor at the Ludwig-Maximilians University, Munich, Germany.

The field of peace and conflict research has grown enormously as an academic pursuit in recent years, gaining credibility and relevance amongst policy makers and in the international humanitarian and NGO sector. The Routledge Studies in Peace and Conflict Resolution series aims to provide an outlet for some of the most significant new work emerging from this academic community, and to establish itself as a leading platform for innovative work at the point where peace and conflict research impacts on International Relations theory and processes.