Reflections on the Cliometrics Revolution
Conversations with Economic Historians 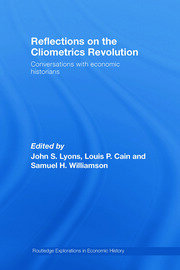 Reflections on the Cliometrics Revolution: Conversations with Economic Historians

This volume marks fifty years of an innovative approach to writing economic history often called "The Cliometrics Revolution." The book presents memoirs of personal development, intellectual lives and influences, new lines of historical research, long-standing debates, a growing international scholarly community, and the contingencies that guide and re-direct academic careers. In conversation with cliometricians of the next generation, 25 pioneering scholars reflect on changes in the practice of economic history they have observed and have helped to bring about, examining the rise of Western economies and their economic interrelationships, and the impact of modern economic growth on human health, mortality and even happiness. The conversations presented here are engaging, informative and – more often than one might expect – humorous. Together with a framework provided by the editors, they tell a tale of how cliometricians, their allies and their critics, have helped to transform what we know about the economic past.

John S. Lyons teaches at the Department of Economics at Miami University.

"This book contains interviews with 25 academics who 'participated directly or indirectly' in the development of what was known as the 'new economic history' or the 'cliometrics revolution' of the late 1960s and 1970s... In the introduction the editors do a fine job of placing the methodological innovations in relation to various personalities and their works, career developments and institutions... this is a thought provoking book about the history of our discipline that is also an engaging read."