Reforming Education in Developing Countries
From Neoliberalism to Communitarianism 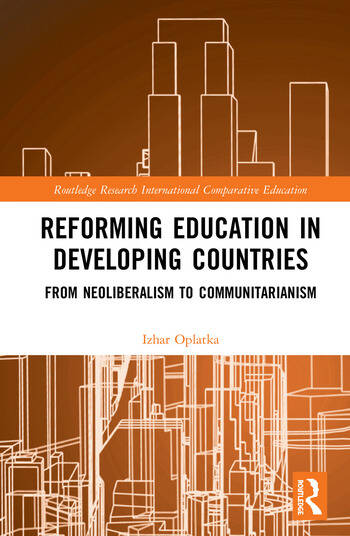 Reforming Education in Developing Countries: From Neoliberalism to Communitarianism

Underpinned in the stream of thought named ‘communitarianism’, Reforming Education in Developing Countries argues that developing countries need educational reforms that are tightly entwined into their cultural, social, and organizational contexts. It questions the applicability of neoliberal reforms in developing societies, through an analysis of the main elements of neoliberalism in education. It highlights the critical role of the community and suggests new and alternative lines of thought for the practice of reform initiation and implementation in developing countries.

The book criticizes major neoliberal ideas in education, illuminates the distinctions between current neoliberal reforms and the characteristics of traditional societies, analyzes major educational ideologies in the developed world, and emphasizes the key role of local communities in this world. It proposes a dynamic model of reforming education in these countries that includes three major phases and integrates both modern and traditional (indigenous) educational purposes and values. Evocative ponderings are outlined throughout the book to promote critical thinking and reframing of educators' views towards educational reform and change.

This book will be of great interest to researchers and students in the fields of educational leadership, educational policy, educational change, comparative education, political science, and sociology. It will also appeal to educators, supervisors, and policymakers.

Chapter 2 The characteristics of neoliberal reforms in educational systems worldwide

Chapter 3 Conceptual models of modernity versus traditionalism: The colorful portrait of the developing world

Chapter 4 The failure of educational reforms in developing countries

Chapter 5 The communitarian perspective and education

Chapter 9 Reform management in the school

Chapter10 Towards a new conceptualization of education reforms in developing countries

"Reforming Education in Developing Countries is a timely addition to our knowledge base on leading the implementation of education reforms around the world. Over the past two decades, the tradewinds have carried education reforms originating in the USA, UK , Europe and Australia to developing societies throughout the world. Despite the rapid uptake by policymakers of reform policies focused on education quality, accountability, standards, and student achievement, the gap between aspiration and enactment appears to have only grown wider. Oplatka offers an insightful analysis of why this has been the case and proposes an alternate view that takes into account the nature of the communities in which reforms are being implemented. I strongly endorse scholars and practitioners in developing societies who may feel frustrated by the slow pace of reform enactment to read this volume in order to gain deeper insight into the causes of failure and the possibilities of a new path."

"Oplatka has established himself as a leading scholar of school leadership and education reform. In Reforming Education in Developing Countries he actively challenges the applicability of reforms flowing from neoliberal agendas in western societies to countries with very different cultural, social and developmental compositions. His call for recognising the role of community in the policy process in developing societies promises a major rethink of the how, why and what of global education reforms. This book elevates Oplatka’s standing in the field as an original and evocative writer. It is a must-read for anyone interested in education reform internationally."

"In an era of worldwide educational reform, and in particular efforts to reform schools in developing contexts, Oplatka urges readers to consider the vital role that the very communities intended to benefit from reform play in shaping and supporting its passage. This book raises important questions about the role that context and culture play in successful educational reform and necessitates critical thinking about the aims of policies that seek to change teaching and learning without consideration of community. An important read for policymakers, scholars, and educators concerned about ensuring that increasing educational access also results in educational excellence."