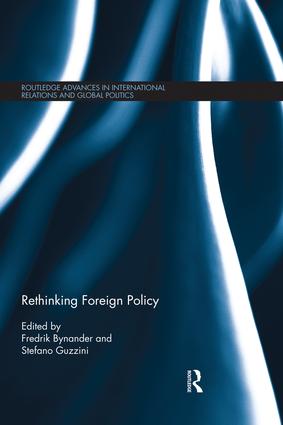 This edited volume is a tribute to, and a debate with, the scholarship of Walter Carlsnaes and his contribution to the study of foreign policy in both its conceptualization and application.

This book probes the theoretical boundaries of Foreign policy analysis, and questions orthodox understandings of the field. It examines the Agency-Structure debate, the question of how human decision-making affects the norms and institutions of international interactions (and vice versa), and analyses how the study of Foreign Policy can be applied to the European Union as a supranational entity devoid of traditional statehood. Contributors offer an in-depth discussion on the intricacies of studying foreign policy, and provide new perspectives on the standing of the EU as a foreign policy entity.

will be of interest to students and scholars of International Relations, Foreign Policy, Global Governance, EU studies, and the work of Walter Carlsnaes.

Fredrik Bynander is Associate Professor at the Swedish National Defence College in Stockholm, Sweden, and was, until recently, Head of Unit at the Prime Minister’s Office.

Stefano Guzzini is Senior Researcher at the Danish Institute for International Studies in Copenhagen, Denmark, and Professor of Government at Uppsala University, Sweden.