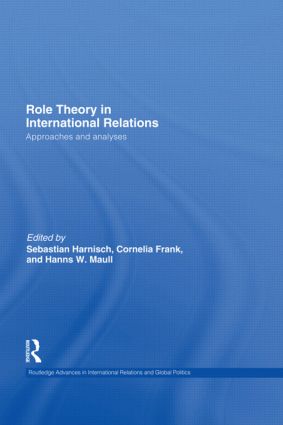 Role Theory in International Relations provides a comprehensive, up-to-date survey of recent theoretical scholarship on foreign policy roles and extensive empirical analysis of role behaviour of a variety of states in the current era of eroding American hegemony.

Taking stock of the evolution of role theory within foreign policy analysis, international relations and social science theory, the authors probe role approaches in combination with IR concepts such as socialization, learning and communicative action. They draw upon comparative case studies of foreign policy roles of states (the United States, Japan, PR China, Germany, France, UK, Poland, Sweden, and Norway) and international institutions (NATO, EU) to assess NATO’s transformation, the EU as a normative power as well as the impact of China’s rise on U.S. hegemony under the Bush and Obama administrations. The chapters also offer compelling theoretical arguments about the nexus between foreign policy role change and the evolution of the international society.

Sebastian Harnisch is Professor of International Relations and Foreign Policy at the University of Heidelberg, Germany

Cornelia Frank is Lecturer in Political Science at the Chair for Foreign Policy and International Relations, University of Trier, Germany.

Hanns W. Maull is Professor of Foreign Policy and International Relations at the University of Trier, Germany.