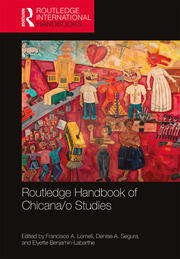 The Routledge Handbook of Chicana/o Studies is a unique interdisciplinary resource for students, libraries, and researchers interested in the largest and most rapidly growing racial-ethnic community in the United States and elsewhere which can either be identified as Chicano, Latino, Hispanic, or Mexican-American. Structured around seven comprehensive themes, the volume is for students of American studies, the Social Sciences, and the Humanities. The volume is organized around seven critical domains in Chicana/o Studies:

The Handbook will stress the importance of the historical origins of the Chicana/o Studies field. Starting from myth of origins, Aztlán, alleged cradle of the Chicana/o people lately substantiated by the findings of archaeology and anthropology, over Spanish/Indigenous relations until the present time. Essays will explore cultural and linguistic hybridism and showcase artistic practices (visual arts, music, and dance) through popular (folklore) or high culture achievements (museums, installations) highlighting the growth of a critical perspective grounded on key theoretical formulations including borderlands theories, intersectionalities, critical race theory, and cultural analysis.

Francisco A. Lomelí is Distinguished Professor at the University of California, Santa Barbara, in the Spanish and Portuguese and Chicana/o Studies Departments. His areas of interest and expertise include Chicana/o literature and culture, Southwest literary history, Latin American literature (the novels and certain regions like Central America, Mexico, parts of South America), Spanglish, and literary theory pertaining to Chicana/o Studies.

Denise A. Segura is Professor of Sociology and Affiliated Professor in the respective departments of Chicana/o Studies and Feminist Studies at the University of California, Santa Barbara. Recipient of the Lifetime Distinguished Contributions to Research, Teaching and Service from the Latina/o Sociology Section of the American Sociological Association, she publishes widely in Chicana feminist studies borderlands studies, and Chicana/Mexicana employment. She co-edited with Patricia Zavella, Women and Migration in the U.S.-Mexico Borderlands, Duke University Press, 2007.

Elyette Benjamin-Labarthe is Honorary Professor of American Studies at Michel de Montaigne University, France, affiliated with the CLIMAS Bordeaux research center, and has published extensively on Chicano poetry, literature, culture, arts, drama, cinema, on the literature of immigration, and transcultural phenomena. Her main contributions to the field, as author, co-author, editor, or co-editor are Vous Avez Dit Chicano, Ecritures Hispaniques aux Etats-Unis: Mémoire et Mutations, Cinéma américain: aux marches du Paradis, Cinéma métis: le cinéma de la frontière Mexique/Etats-Unis, Confrontations et Métissages. She has been conferred the distinction of Knight of the Legion of Honor for services rendered to French research and that of Commander of Academic Palms for her educational activities.