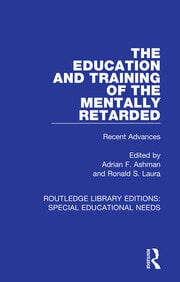 This set of 62 volumes, originally published between 1951 and 1999, amalgamates a wide breadth of literature on Special Educational Needs, with a particular focus on inclusivity, class management and curriculum theory. This collection of books from some of the leading scholars in the field provides a comprehensive overview of the subject how it has evolved over time, and will be of particular interest to students of Education and those undertaking teaching qualifications.