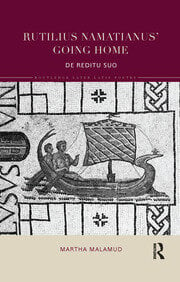 Martha Malamud provides the only scholarly English translation of De Reditu Suo with significant notes and commentary that explore historical, literary, cultural, and mythical references, as well as commenting on literary allusions, the structure, diction, and style of the poem, and textual issues.

provides fascinating insights into travel and communications networks in the rapidly changing, fragmented world of the fifth century. A substantial introductory essay explores Rutiliusā€™ place in several intellectual and literary traditions, as the poem is a sophisticated piece of literature that both draws on the rich tradition of classical Latin poetry and reflects the distinctive formal features of late antique poetry. The poem also conveys the thoughts of a man passionately devoted to Rome and its cultural heritage, enmeshed in the tumultuous political and social upheaval of his day, caught between his hopes for Romeā€™s restoration and his fear of its disintegration.

With line-for-line translation from the Latin and a scholarly introduction, extensive notes, and comprehensive bibliography, Martha Malamud makes this important text accessible and relevant for students and scholars in Classics, Comparative Literature, Religious Studies, Medieval Studies, and Ancient History, as well as independent readers with an interest in the literature of the period.

Martha Malamud is a Professor in the Classics Department at the University at Buffalo (State University of New York). She specializes in Roman imperial and late antique literature, and has edited the classical journal Arethusa since 1995.

"Malamud's elegant translation, with authoritative introduction and notes, succeeds wonderfully in making Rutilius' poem accessible for the first time to the modern reader. The poet's elegiac response to a changing world in the aftermath of the invasion of Gaul and the fall of Rome will now find the readership the fascination of its subject matter deserves." - Professor Michael Roberts, Wesleyan University

"We are long overdue for a modern English translation of De reditu suo for classroom use, so this volume is both timely and welcome. The poem is particularly instructive for the light that it sheds on a paganā€™s perspective of Rome and its legacy in the early fifth century... Malamudā€™s modern translation deserves to find a place in college classrooms." - Bryn Mawr Classical Review