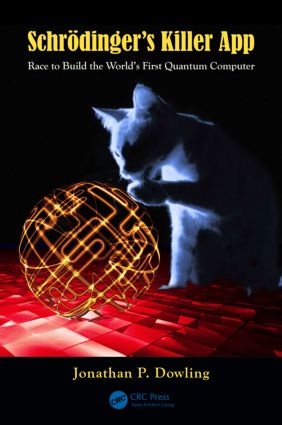 The race is on to construct the first quantum code breaker, as the winner will hold the key to the entire Internet. From international, multibillion-dollar financial transactions to top-secret government communications, all would be vulnerable to the secret-code-breaking ability of the quantum computer.

Written by a renowned quantum physicist closely involved in the U.S. government’s development of quantum information science, Schrödinger’s Killer App: Race to Build the World’s First Quantum Computer presents an inside look at the government’s quest to build a quantum computer capable of solving complex mathematical problems and hacking the public-key encryption codes used to secure the Internet. The "killer application" refers to Shor’s quantum factoring algorithm, which would unveil the encrypted communications of the entire Internet if a quantum computer could be built to run the algorithm. Schrödinger’s notion of quantum entanglement—and his infamous cat—is at the heart of it all.

The book develops the concept of entanglement in the historical context of Einstein’s 30-year battle with the physics community over the true meaning of quantum theory. It discusses the remedy to the threat posed by the quantum code breaker: quantum cryptography, which is unbreakable even by the quantum computer. The author also covers applications to other important areas, such as quantum physics simulators, synchronized clocks, quantum search engines, quantum sensors, and imaging devices. In addition, he takes readers on a philosophical journey that considers the future ramifications of quantum technologies.

"This is a beautifully written book that presents the carefully researched facts in an engaging style. The historical narrative, everywhere, is spiced up with entertaining anecdotes and sprinkled with references. The math and physics are presented through simple examples illustrated by drawing on analogies, while avoiding the use of any equations."

"… explains the difficult concepts of quantum mechanics to laypersons, using analogies that require no background in physics or advanced mathematics. These concepts include quantum entanglement, Schrodinger's cat, and quantum computational complexity. Dowling (Louisiana State) has worked with the US Department of Defense (DoD) in their development of quantum information sciences for the last 20 years. The book's title refers to the fact that all the encrypted communication of the Internet could easily be unveiled by a quantum computer, thus leading to competition to develop such a machine. The work begins with a discussion of Einstein, who fought against many notions of quantum physics, such as quantum entanglement and quantum computational complexity. The second chapter explains Bell's theorem, proving that the entanglement 'action at a distance' idea actually takes place. Later chapters address how the public-key encryption system used by the Internet can be broken by a quantum computer; one-time pad encryption together with the unbreakable quantum key distribution technique and the DoD's efforts to build a quantum computer; and the idea of building a quantum computer using entangled particles as the underlying building blocks. Recommended."

All I'm Ever Going to be Is Incomplete

The Cat in the App

For Whom the Bell Tolls

The Trouble with Thulium

Turing Machines and a Deutsch Treat

Your Pad or Mine?

The Bolt from the Blue

You're in the Army Now

The Notebook, the Spy, and the Workshop

Needle in a Haystack

Quantum Computing in a Coffee Cup—When the Buzz Wears Off

More Gadgets from the Quantum Spookhouse

Beam Me Up, Charlie

The Tale of the True Timepiece

From Quantum Computers to Quantum Sensors

Quantum Technology in a FLASH

The Church of the Larger Hilbert Space

To Go Where No Mad Scientist Has Gone Before

Jonathan P. Dowling is the Hearne Chair Professor of Theoretical Physics and co-director of the Hearne Institute for Theoretical Physics at Louisiana State University. He is a fellow of the American Association for the Advancement of Science, the American Physical Society, the Institute of Physics, and the Optical Society of America. Dr. Dowling has published more than 125 articles with an h-index of over 37 and holds eight U.S. patents in the fields of nonlinear and quantum optics. He has been a recipient of the Willis E. Lamb Medal for Laser Science and Quantum Optics, the U.S. Army Research and Development Achievement Award, and the NASA Space Act Award. He earned a PhD in mathematical physics from the University of Colorado-Boulder.