Science and Religion
East and West 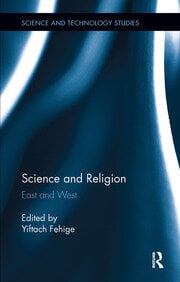 Science and Religion: East and West

This volume situates itself within the context of the rapidly growing interdisciplinary field that is dedicated to the study of the complex interactions between science and religion. It presents an innovative approach insofar as it addresses the Eurocentrism that is still prevalent in this field. At the same time it reveals how science develops in the space that emerges between the ‘local’ and the ‘global’. The volume examines a range of themes central to the interaction between science and religion: ‘Eastern’ thought within ‘Western’ science and religion and vice versa, and revisits thinkers who sought to integrate ‘Eastern’ and ‘Western’ thinking. It studies Zen Buddhism and its relation to psychotherapy, Islamic science, Vedantic science, atheism in India, and Darwinism, offering in turn new perspectives on a variety of approaches to nature.

Part of the Science and Technology Studies series, this volume brings together original perspectives from major scholars from across disciplines and will be of great interest to scholars and students of science and technology studies, history of science, philosophy of science, religious studies, and sociology.

Introduction 1. Science International (Beyond the West): The Ups and Downs of Trans-Cultural Science 2. Zen, Suzuki and the Art of Psychotherapy 3. India's Response to Darwin 4. Perspectives on the Relation between Science and Religion in India 5. Jagadish Chandra Bose and Vedantic Science 6. Ancient Indian Philosophy meets Modern Western Science: Discussions of Causality and Consciousness in the Colonial Indian Academy 7. Being Religious, Being Scientific: Science, Religion, and Atheism in Contemporary India 8. Betwixt Science and Religion; East and West: Jesuits in 17th and 18th Century Southern India 9. Exploring the Contemporary Debate Over Islam and Science in India: Portrait of the Aligarh School 10. How Scientific was Islamic Science? A Case Study in the Alchemy of al-Razi 11. Western influences on Greek scholars: The scientific education of Greek Orthodox during the 17th century

Yiftach Fehige is Professor of Philosophy for Christianity and Science, Institute for the History and Philosophy of Science and Technology (IHPST), University of Toronto, Canada. He is widely published in the field of science and religion.

‘By extending the scope of the discussion beyond the Western Christian world, it not only addresses these old questions but raises some new ones.’