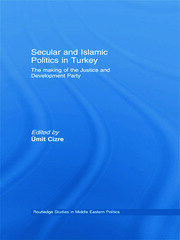 Secular and Islamic Politics in Turkey: The Making of the Justice and Development Party

Turkey is ninty-nine per cent Muslim, its ruling party, Justice and Development Party (JDP), comes from but denies its Islamist pedigree and has a very secular feel. However, the deeply secular regime distrusts the JDP with regard to its 'true' colours. This book makes sense of these paradoxical perceptions which have characterized Turkey’s politics since the JDP has come to power in 2002.

The key momentum for shaping the nature and trajectories of the ruling party of Turkey since 2002, the JDP, has been the ‘identity’ question. The JDP’s commitment to transform Turkey’s politics was part of its engagement to remake its own identity. The JDP’s adoption of a conservative-democrat identity has rested on a new understanding of Westernization, secularism, democracy and the role and relevance of Islam in politics.

The book’s central problematic is to explain both the politics of change the JDP initiated and sustained in the first three years in office and the politics of retreat it has made from its reformist discourse since 2005. The book analyzes not just the catalysts for its reformist discourse of the first 3 years but tries to explain its reversal to an inward-looking conservative nationalist course. By approaching this topical debate from the conceptual stance rather than a party-centered approach, Ümit Cizre identifies that the change the JDP has initiated within Turkey’s political Islam and in Turkish politics is the product of an interactive process between many levels, actors, forces and historical periods. The forces and actors covered include: