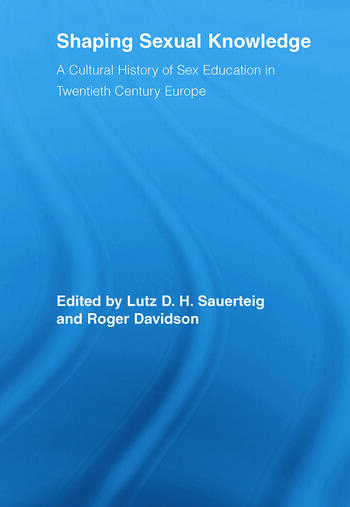 Shaping Sexual Knowledge: A Cultural History of Sex Education in Twentieth Century Europe makes a considerable contribution not only to the cultural history of sexual enlightenment and identity in modern Europe, but also to the history of childhood and adolescence. The essays collected in this volume treat sex education in the broadest sense, incorporating all aspects of the formal and informal shaping of sexual knowledge and awareness of the young. The volume, therefore, not only addresses officially-sanctioned and regulated sex education delivered within the school system and regulated by the State and in some cases the Church, but also the content, iconography and experience of sexual enlightenment within the private sphere of the family and as portrayed through the media.

Lutz D.H. Sauerteig, Lecturer in History of Medicine at Durham University, UK. He is working on a history of sex education of the young (1880s-1970s) and has widely published on the history of venereal diseases in Germany and England. His publications include Krankheit, Sexualität, Gesellschaft: Geschlechtskrankheiten und Gesundheitspolitik in Deutschland im 19. und frühen 20. Jahrhundert (Stuttgart: Steiner, 1999).

Roger Davidson, Emeritus Professor of Social History and Leverhulme Emeritus Fellow, University of Edinburgh, UK. He has widely published on the social history of venereal diseases and sexuality. A former editor of Social History of Medicine, he is currently working on a co-authored study of The Sexual State: Sexuality and Governance in Scotland, 1950-80.