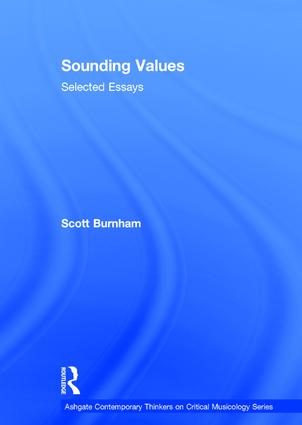 For several decades, Scott Burnham has sought to bring a ready ear and plenty of humanistic warmth to musicological inquiry. Sounding Values features eighteen of his essays on mainstream Western music, music theory, aesthetics and criticism. In these writings, Burnham listens for the values-aesthetic, ethical, intellectual-of those who have created influential discourse about music, while also listening for the values of the music for which that discourse has been generated. The first half of the volume confronts pressing issues of historical theory and aesthetics, including intellectual models of tonal theory, leading concepts of sonata form, translations of music into poetic meaning, and recent rifts and rapprochements between criticism and analysis. The essays in the second half can be read as a series of critical appreciations, engaging some of the most consequential reception tropes of the past two centuries: Haydn and humor, Mozart and beauty, Beethoven and the sublime, Schubert and memory.

Contents: Introduction; Part I Theories and Practices: Romantic Aesthetics: Review Essay: E.T.A. Hoffmann's Musical Writings; Criticism, faith and the idée: A.B. Marx's early reception of Beethoven. Interpreting Historical Theory: Musical and intellectual values: interpreting the history of tonal theory; Method and motivation in Hugo Riemann's history of harmonic theory; A.B. Marx and the gendering of sonata form; Models of musical analysis: form. The State of Play: Approaches to Criticism and Analysis: The criticism of analysis and the analysis of criticism; Theorists and 'the music itself'; How music matters: poetic content revisited. Part II Impact and Effect: Critical Takes on Canonic Composers: Haydn, Mozart, Beethoven: The second nature of the sonata form; Haydn and humor; Mozart's felix culpa: CosÃ¬ fan tutte and the irony of beauty; On the beautiful in Mozart; Our sublime Ninth; The 4 ages of Beethoven: critical reception and the canonic composer. Schubert, Schumann: Schubert and the sound of memory; Landscape as music, landscape as truth: Schubert and the burden of repetition; Novel symphonies, dramatic overtures; Index.

Scott Burnham is Professor of Music at Princeton University, USA

The titles in this series bring together a selection of previously published and some unpublished essays by leading authorities in the field of critical musicology. The essays are chosen from a wide range of publications and so make key works available in a more accessible form. The authors have all made a selection of their own work in one volume with an introduction which discusses the essays chosen and puts them into context. A full bibliography points the reader to other publications which might not be included in the volume for reasons of space. The previously published essays are published using the facsimile method of reproduction to retain their original pagination, so that students and scholars can easily reference the essays in their original form.