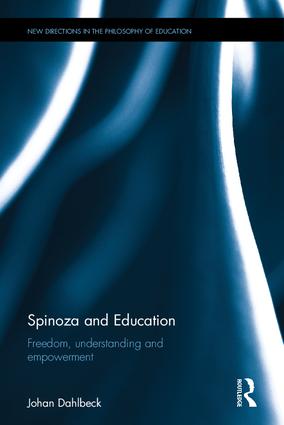 Spinoza and Education offers a comprehensive investigation into the educational implications of Spinoza’s moral theory. Taking Spinoza’s naturalism as its point of departure, it constructs a considered account of education, taking special care to investigate the educational implications of Spinoza’s psychological egoism. What emerges is a counterintuitive form of education grounded in the egoistic striving of the teacher to persevere and to flourish in existence while still catering to the ethical demands of the students and the greater community.

In providing an educational reading of Spinoza’s moral theory, this book sets up a critical dialogue between educational theory and recent studies which highlight the centrality of ethics in Spinoza’s overall philosophy. By placing his work in a contemporary educational context, chapters explore a counterintuitive conception of education as an ethical project, aimed at overcoming the desire to seek short-term satisfaction and troubling the influential concept of the student as consumer. This book also considers how education, from a Spinozistic point of view, may be approached in terms of a kind of cognitive therapy serving to further a more scientifically adequate understanding of the world and aimed at combating prejudices and superstition.

‘Spinoza argued that the greatest help to one person seeking knowledge is another person with the same aim. Johan Dahlbeck presents an engaging, original account of how we help one another. Spinoza and Education is a well-informed, useful introduction to Spinoza and a thoughtful application of Spinoza’s views to pressing issues in the philosophy of education.’

‘This book contributes to the ongoing reconception of Spinoza as foremost a moral philosophy, while developing an important conversation about Spinoza’s philosophy of education. The book adeptly renders a famously obscure and abstract philosophical system into a comprehensible and practical theory that speaks productively to the real life concerns facing educators and students.’

‘Spinoza excites the educational imagination. Johan Dahlbeck’s Spinoza and Education amplifies this excitement, engaging with the ‘substance’ of Spinoza’s ethics of self-preservation, and taking care to trace the implications of this ethics for teachers. As such Dahlbeck’s work reveals the Spinozan roots of many contemporary critiques of institutionalised education.’

Introduction: Why All Education Begins and Ends in Moral Education 1. Spinoza’s Ethical Project 2. To Be Educated Is to Exist More: Spinoza’s Gradualist Notion of Reality 3. Self-preservation as an Educational Ideal 4. Moderating the Passive Affects: Education, Imagination and Causation 5. Educational Implications of the Doctrine of the Imitation of Affects 6. Teaching as the Art of Offering the Right Amount of Resistance Conclusion: Outlining a Spinozistic Account of Education

Johan Dahlbeck is Senior Lecturer in Child and Youth Studies at Malmö University.