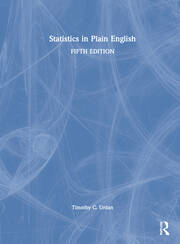 Statistics in Plain English is a straightforward, conversational introduction to statistics that delivers exactly what its title promises. Each chapter begins with a brief overview of a statistic that describes what the statistic does and when to use it, followed by a detailed step-by-step explanation of how the statistic works and exactly what information it provides. Chapters also include an example of the statistic (or statistics) in use in real-world research, "Worked Examples," "Writing It Up" sections that demonstrate how to write about each statistic, "Wrapping Up and Looking Forward" sections, and practice work problems.

This 5th Edition features several key additions and changes. First, a new chapter on person-centered analyses, including cluster analysis and latent class analysis (LCA) has been added (Chapter 16). Person-centered analysis is an important alternative to the more commonly used variable-centered analyses (e.g., t tests, ANOVA, regression) and is gaining popularity in social-science research. Next, the chapter on non-parametric statistics (Chapter 14) was enhanced significantly with in-depth descriptions of Mann-Whitney U, Kruskall-Wallace, and Wilcoxon Signed-Rank analyses. These non-parametric statistics are important alternatives to statistics that rely on normally distributed data. This new edition also includes more information about the assumptions of various statistics, including a detailed explanation of the assumptions and consequences of violating the assumptions of regression (Chapter 13). There is more information provided about the importance of the normal distribution in statistics (Chapters 4 and 7). Finally, each of the last nine chapters includes an example from the real world of research that employs the statistic, or statistics, covered in the chapter. Altogether, these improvements provide important foundational information about how inferential statistics work and additional statistical tools that are commonly used by researchers in the social sciences.

is suitable for a wide range of readers, including students taking their first statistics course, professionals who want to refresh their statistical memory, and undergraduate or graduate students who need a concise companion to a more complicated text used in their class. The text works as a standalone or as a supplement and covers a range of statistical concepts from descriptive statistics to factor analysis and person-centered analyses.

Timothy C. Urdan is a professor at Santa Clara University. He received his Ph.D. from the Combined Program in Education and Psychology at the University of Michigan, his Master’s degree in Education from Harvard University, and his B.A. in Psychology from University of California, Berkeley. He conducts research on student motivation, classroom contexts, and teacher identity. He serves on the editorial boards of several journals and is the co-editor of the Advances in Motivation and Achievement book series. He is a fellow of the American Psychological Association and lives in Berkeley, California.