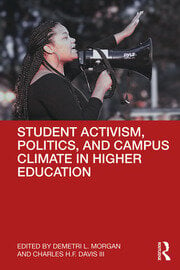 Student Activism, Politics, and Campus Climate in Higher Education presents a comprehensive, contemporary portrait of political engagement and student activism at postsecondary institutions in the United States. This resource explores how colleges and universities are experiencing unrest and in what ways broader sociopolitical conflicts are evident on-campus, ultimately unpacking the political dimensions of student engagement within campus climates. Chapter authors in this book critically synthesize relevant research, illuminate interdisciplinary perspectives, and interrogate how current issues of power and oppression shape participatory democracy and higher education at large. A go-to resource for researchers, faculty, administrators, and student affairs professionals, this text addresses the most intractable challenges facing society and its institutions of higher education.

8 Politics and Pedagogy in the Classroom: From Rehearsal to Performance
Amy Wilkinson

10 From Resistance to Resilience: Transforming Institutional Racism from the Inside Out Jade Agua and Sumun L. Pendakur

is Assistant Professor of Clinical Education and Chief Strategy and Research Officer of the Race and Equity Center at the University of Southern California, USA.

"Davis and Morgan have done us a significant service with this volume. Anyone interested in political engagement and student activism, broadly defined, needs to read this book. And anyone interested in re-energizing democratic politics on and beyond our campuses has the opportunity to build on this work, which combines theorizing, analysis, and praxis, to advance a progressive project that collectively works to bend the arc of the moral universe towards justice."
—From the Foreword by Gary Rhoades, Professor of Higher Education, University of Arizona and General Secretary of the American Association of University Professors

"Political engagement and student activism are among the most pressing contemporary issues for American colleges and universities. Student Activism, Politics, and Campus Climate in Higher Education is an indispensable resource for administrators and faculty to understand how to navigate the current political climate on campus and fulfill the civic mission of higher education."
— Jon Dooley, Vice President for Student Life and Associate Professor of Education, Elon University