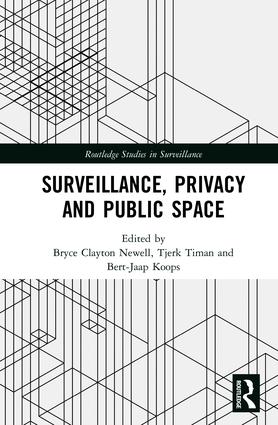 Today, public space has become a fruitful venue for surveillance of many kinds. Emerging surveillance technologies used by governments, corporations, and even individual members of the public are reshaping the very nature of physical public space. Especially in urban environments, the ability of individuals to remain private or anonymous is being challenged.

problematizes our traditional understanding of ‘public space’. The chapter authors explore intertwined concepts to develop current privacy theory and frame future scholarly debate on the regulation of surveillance in public spaces. This book also explores alternative understandings of the impacts that modern living and technological progress have on the experience of being in public, as well as the very nature of what public space really is.

Representing a range of disciplines and methods, this book provides a broad overview of the changing nature of public space and the complex interactions between emerging forms of surveillance and personal privacy in these public spaces. It will appeal to scholars and students in a variety of academic disciplines, including sociology, surveillance studies, urban studies, philosophy, law, communication and media studies, political science, and criminology.

Chapter 1. Privacy and Surveillance in the Streets: An Introduction

PART I. THE CHANGING NATURE OF PUBLIC SPACE

Chapter 4. The Changing Nature of Public Space in São Paulo: A Taxonomic Approach

Chapter 5. A Window into the Soul: Biosensing in Public

Chapter 6. Adverse Detection: The Promise and Peril of Body-Worn Cameras

Chapter 7. "The end of privacy as we know it": Reconsidering Public Space in the Age of Google Glass

Chapter 8. Revisiting Privacy in Public Spaces in the Context of Digital Vigilantism

Chapter 9. Emergency Calls with a Photo Attached: The Effects of Urging Citizens to Use their Smartphones for Surveillance

Chapter 10. "I’m a Creep, I’m a Weirdo": Street Photography in the Service of the Male Gaze

Chapter 11. Legal Standards of Location Privacy in Light of the Mosaic Theory

Bryce Clayton Newell is an Assistant Professor in the School of Information Science at the University of Kentucky. In his research, he focuses on understanding the impact that surveillance and information and communication technologies (ICTs) have on individuals, society, and the law.

is a policy advisor and researcher at TNO, the Netherlands. He has been publishing on topics of policing technologies, surveillance theory and practices, and privacy. Recently, he has co-edited a book on privacy in public space.

is Professor of Regulation & Technology at TILT, Tilburg University. In 2016/17 he was Distinguished Lorentz Fellow at the Netherlands Institute for Advances Study (NIAS). He publishes widely on cybercrime, cyber-investigation, privacy, and data protection, including recently ‘A Typology of Privacy’ and ‘Bentham, Deleuze and Beyond’.