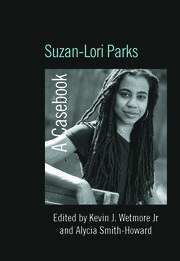 Suzan-Lori Parks confirmed herself as one of the most exciting and successful playwrights of her generation when her work Topdog/Underdog was awarded the 2002 Pulitzer Prize, making her the only African American woman to win the award.

Despite the cultural weight of this achievement, Parks remains difficult both to pigeonhole and to summarize.

This volume seeks to provide a context for her work, with essays from major and emerging scholars addressing the importance of factors such as gender, ethnicity, language and history in plays from her first major work, Imperceptible Mutabilities of the Third Kingdom to the 365 Days / 365 Plays project. Suzan-Lori Parks: A Casebook represents the first major study of this unique voice in contemporary drama.

Kevin J. Wetmore Jr is Professor of Theatre at Loyola Marymount University, as well as being a professional actor and director of the Comparative Drama Conference. He is the author of The Athenian Sun in an African Sky and Black Dionysus: Greek Tragedy and African American Theatre.

Alycia Smith-Howard an Assistant Professor at New York University in the Gallatin School of Individualized Study, where she is the Artistic Director of the Gallatin Arts Festival and the Book Reviews Editor at the New England Theatre Journal. A Fellow of the Folger Shakespeare Library, her areas of specialization include Shakespeare, performance history, feminist theatre aesthetics and literature and drama of the south.

Kevin J. Wetmore, Jr. is a professor of theatre at Loyola Marymount University. He is also a professional actor and director. Among several other books, he is the author of The Athenian Sun in an African Sky and Black Dionysus: Greek Tragedy and African American Theatre. He also researches and writes on Asian theatre, African theatre, and cross-cultural theatre. He is the director of the Comparative Drama Conference.

Alycia Smith-Howard is an Assistant Professor at New York University in the Gallatin School of Individualized Study, where she is the Artistic Director of the Gallatin Arts Festival. She received both her M.A. and Ph.D. from the Shakespeare Institute, Stratford-upon-Avon, and has taught at Mount Holyoke College, Trinity College and Berea College. Smith-Howard is an accomplished director, has published several articles, and is the book reviews editor for The New England Theatre Journal. She has two books in progress: a co-authored volume entitled Tennessee Williams A to Z: The Essential Reference to His Life, Works and Times (Facts on File, 2004) and Shakespeare at The Other Place (Ashgate, 2004). A Fellow of the Folger Shakespeare Library her areas of teaching interest include Shakespeare studies, modern drama, feminist theatre aesthetics, directing, dramaturgy, performance studies, 19th Century studies, literature and drama of the south, cultural studies and gender studies.