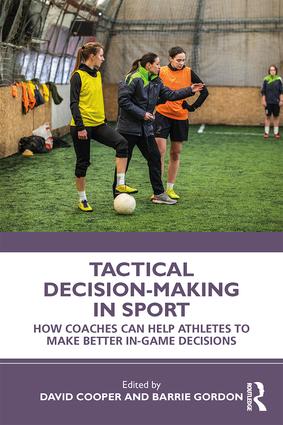 This book expands on the ‘Developing Thinking Players’ model across a wide range of team and individual sports, to explain how coaches can help athletes to learn how to make better decisions during play and to think for themselves. It provides an overview of game-centred and athlete-centred approaches to teaching and coaching in sport, combining essential theory with practical tips and guidance.

Written by an international team of coaching researchers and practicing coaches, the book provides sport-specific instructions for coaching players in territory games, net games, striking games, target games, racquet games and combat sports, including netball, basketball, ice hockey, cricket, softball, football, rugby, volleyball, squash and karate. The book argues that the implementation of these student and athlete-centred approaches creates more opportunities for athletes to understand their sport and improves their ability to think for themselves and to learn to make better in-game decisions. Providing a theoretical underpinning for teaching tactical decision-making, it considers the development of players at all levels and age groups, from youth athletes to elite level. Thirteen sport-specific case studies offer real-world coaching insights.

This is essential reading for any student, researcher or practicing teacher or coach working in sport, physical education and coach education.

4. Common Considerations within the four pillars of coaching with reference to territory games

5. Challenges that coaches face in empowering athletes to “think for themselves”

6. Can game data measure the effectiveness of the athlete decision-making process?

7. Soccer (North America) or Football (Rest of the World)

Part IV: Through the Lens of a Coach

21. Reflection on a lifetime of coaching

Part V: How Can Coaches Successfully Turn Theory into Practice?

David Cooper is Associate Professor, Teaching Stream in the Faculty of Kinesiology and Physical Education at the University of Toronto, Canada. He is a National Coaching Certification Program (NCCP) Course Facilitator and was Head Coach (1998-2015) of the successful University of Toronto Varsity Blues women’s squash team.

Barrie Gordon is Associate Professor in Health and Physical Education at the Victoria University of Wellington, New Zealand. Barrie has been involved in playing fastpitch softball in the New Zealand national league and currently represents New Zealand in the over 55s TAG football team.