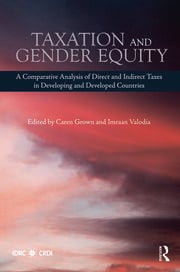 Taxation and Gender Equity: A Comparative Analysis of Direct and Indirect Taxes in Developing and Developed Countries

Around the world, there are concerns that many tax codes are biased against women, and that contemporary tax reforms tend to increase the incidence of taxation on the poorest women while failing to generate enough revenue to fund the programs needed to improve these women’s lives. Because taxes are the key source of revenue governments themselves raise, understanding the nature and composition of taxation and current tax reform efforts is key to reducing poverty, providing sufficient revenue for public expenditure, and achieving social justice.

This is the first book to systematically examine gender and taxation within and across countries at different levels of development. It presents original research on the gender dimensions of personal income taxes, and value-added, excise, and fuel taxes in Argentina, Ghana, India, Mexico, Morocco, South Africa, Uganda and the United Kingdom. This book will be of interest to postgraduates and researchers studying Public Finance, International Economics, Development Studies, Gender Studies, and International Relations, among other disciplines.

‘This book shows that taxation is often not neutral between the genders when it should be, and is sometimes neutral when it should not be. Taking the perspective of horizontal and vertical equity, its case studies illuminate how tax systems and tax reforms can be inequitable across genders, and much of the time because the gendered structure of economy and society is not an integral part of the tax design debate. The book represents an important contribution to that debate, and will be very useful to researchers and practitioners, particularly in developing countries.’

‘As the pendulum swings once again towards greater state economic involvement and therefore an increased need for state resources, there is an urgent need to understand whether tax systems are biased against women and if they could be reinforcing gender inequalities.  This groundbreaking volume examines the gender dimensions of tax systems in seven developing and one developed country and is the first systematic treatment of its kind.  The conceptual framework that it poses should be part of the toolkit of policy professionals, donor staff, and gender specialists in years to come.’

‘Equity issues are again attracting attention from academics and policy analysts concerned with taxation. This book makes a substantial contribution to this new awareness by emphasizing the important role that gender, like other social stratifications such as race and income, often plays in determining the impact of taxation on well-being. The editors have done a fine job not only in setting out the questions considered in the volume clearly and in context but also by establishing a uniform methodological approach that has been followed in the country papers, thus allowing them to present the results in a comparable and comprehensible form. In turn, the case studies of mainly developing countries are rich in detail and make it clear that those concerned with the extent to which taxation perpetuates or alters distributional outcomes in any country need to pay close attention to how taxes on consumption are structured and administered as well as to such more traditional gender-related income tax issues as the treatment of household income. This book should be on the shelf of anyone concerned with either tax policy or gender issues in both developing and developed countries.’

‘This highly original  book is essential reading for everyone concerned with equality in taxation. It provides a powerful conceptual framework, that goes beyond comparing male and female headed households;  and sets out detailed empirical findings on the gender dimensions of both direct and indirect taxation. It will be invaluable in extending gender-responsive budgeting from expenditure to taxation.’

- Diane Elson, Centre for Research in Economic Sociology and Innovation, University of Essex, and Chair of Women's Budget Group, UK