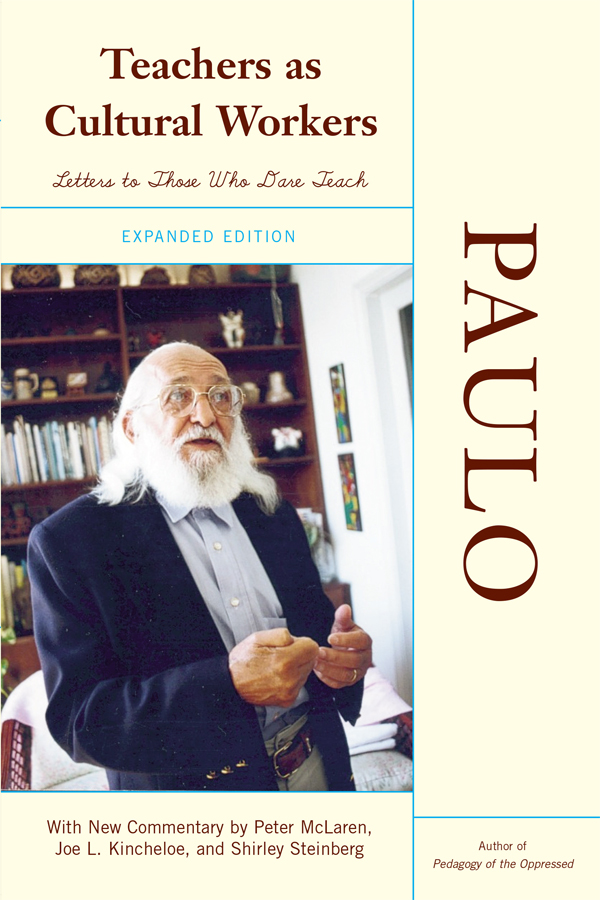 In Teachers as Cultural Workers, Freire speaks directly to teachers about the lessons learned from a lifetime of experience as an educator and social theorist. Freire's words challenge all who teach to reflect critically on the meaning of the act of teaching as well as the meaning of learning. He shows why a teacher's success depends on a

* First Words: A Pedagogical Trap * First Letter: Reading the World/Reading the Word * Second Letter: Dont Let the Fear of What Is Difficult Paralyze You * Third Letter: I Came into the Teacher Training Program Because I Had No Other Options * Fourth Letter: On the Indispensable Qualities of Progressive Teachers for Their Better Performance * Fifth Letter: The First Day of School * Sixth Letter: On the Relationship Between the Educator and the Learners * Seventh Letter: From Talking to Learners to Talking to Them and with Them; From Listening to Learners to Being Heard by Them * Eighth Letter: Cultural Identity and Education * Ninth Letter: Concrete Context/Theoretical Context * Tenth Letter: Once More the Question of Discipline * Last Words: To Know and to GrowEverything Yet to See

Paulo Freire (1921-1997) was a world-renowned Brazilian education scholar. Perhaps the most influential thinker about education in the late twentieth century, Freire has been particularly popular with informal educators with his emphasis on dialogue and his concern for the oppressed. His legacy of commitment, love and hope to American educators can be found in the critical pedagogy which infuses hundreds of "grass roots" organizations, college classrooms, and most recently school reform efforts in major urban areas. Freire was a prolific writer and author of many books. His most important work was Pedagogy of the Oppressed in which he describes the oppressive mechanisms of a capitalist education.