Teaching Science and Technology in the Early Years (3-7) 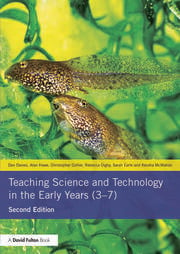 Teaching Science and Technology in the Early Years (3-7)

Teaching Science and Technology in the Early Years (3-7) celebrates young children’s amazing capabilities as scientists, designers and technologists. Research-based yet practical and accessible, it demonstrates how scientific, designing and making activities are natural to young children, and have the potential for contributing to all aspects of their learning.

By identifying the scientific and design-related concepts, skills and activities being developed, the book enables the reader to make more focused diagnostic observations of young children and plan for how they can help move them forward in their learning. This second edition has been thoroughly updated and features:

Based on the latest research and the first hand experience, this practical and accessible book is essential reading for early years and primary students on undergraduate and Masters level courses.

2. Young children as scientists, designers and technologists – theories of learning

4. Outdoor learning in science and technology

6. Planning for science and technology in the early years

7. Sowing the seeds – a thematic approach to plant life in the early years

8. A thematic approach to humans and animals in the early years

9. A thematic approach to everyday materials in the early years

10. A thematic approach to changing materials in the early years

11. A thematic approach to forces, electricity and magnets in the early years

12. A thematic approach to sound, light and space in the early years

13. Moving on – transitions in early years science and technology

Dan Davies is Head of Research and Graduate Affairs in the School of Education, Bath Spa University, UK. He is Professor of Science and Technology Education and leads the Centre for Research in Early Scientific Learning (CRESL), which is a Primary Science Teaching Trust Regional Hub.

is Acting Head of Department of Education and Childhood Studies at Bath Spa University and a founding member of CRESL.

is a senior lecturer in Primary Science at Bath Spa University and a member of CRESL.

is a senior lecturer in Primary and Early Years Education at Bath Spa University and a member of CRESL.

spent 13 years teaching in primary schools in Bristol before moving to Bath Spa University as a senior lecturer on the Primary PGCE. She is also a member of CRESL.

spent 10 years as a primary school teacher in the South West of England before becoming a senior lecturer in Education at Bath Spa University and a founding member of CRESL.

"I found the chapter on documenting childrens learning stories to be very helpful, along with the updated examples of practical planning. It is a book that reassures you that children are natural scientists, investigators and explorers, and that it is simply a case of us capturing those experiences, the evidence of learning through play and setting up the irresistible and provocative experiences to scaffold and build on their current knowledge." - Martine Horvath, eye magazine