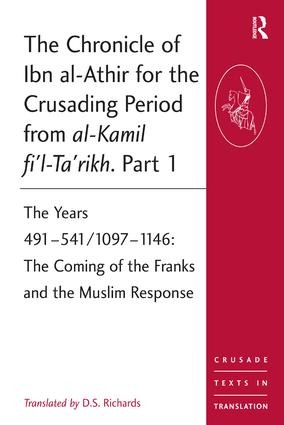 The Chronicle of Ibn al-Athir for the Crusading Period from al-Kamil fi'l-Ta'rikh. Part 1

The Chronicle of Ibn al-Athir (1160-1233AD), entitled 'al-Kamil fi'l-Ta'rikh', is one of the outstanding sources for the history of the mediaeval world. It covers the whole sweep of Islamic history almost up to the death of its author and, with the sources available to him, he attempted to embrace the widest geographical spread; events in Iraq, Iran and further East run in counterpoint with those involving North Africa and Spain. From the time of the arrival of the Crusaders in the Levant, their activities and the Muslim response become the focus of the work. This part covers the establishment of the Crusader states and the initial weak and divided response of Muslim regimes in the area, the moribund Fatimid caliphate in Egypt and competing emirs in Syria and Mesopotamia. The strengthening of the Muslim reaction is typified by the career of Zanki, which also illustrates the important links with events in the orbit of the Abbasid caliphate and the Saljuq sultanate.

’Richards provides a valuable service to many constituencies with this useful translation…allows English-only readers to see the relative importance of the Western incursion by viewing it through the lens of the Muslim world…Highly recommended. All levels/libraries.’ Choice ’The chronicle is of particular value for the modern historian in presenting the entirety of Islamic political and external affairs for the period in question… It is thus especially useful that an unabridged translation into English is made available here…’ Medium Aevum ’In general, the translation reads very smoothly, and abstruse technical terms and personal and place-names are explained in the footnotes. There is also a useful introduction to the author and his work. For the large number of scholars working on the history of the crusades, the chronicle of Ibn Al-Athir is a vital Muslim source, if not the most important source, from 'the other side'. Anyone who translates this amount of Arabic, much of which has never been translated before into a European language, deserves the highest praise for making accessible a most fascinating primary source. Donald Richards has put historians of the crusades for generations to come firmly in his debt.’ Speculum Journal

D.S. Richards has retired as Lecturer in Arabic at the Oriental Institute, and is Emeritus Fellow of St Cross College, University of Oxford, U.K.