The City as Target 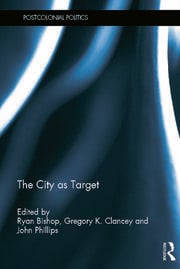 The City as Target

Bringing together scholars from a diverse range of disciplines, The City as Target provides a sustained and critical response to the relationship between the concept of targeting (in its many forms) and notions of understanding, imagining and shaping the urban.

Among the many spatial and graphic terms used to describe cities in urban studies, the word target is rarely encountered. Though equally spatial, it differs from these others by implying some motive force, and, more than that, a force with some intentionality. To target is to aim, to project, and ultimately to impact. It suggests a space of violence, or at least action, or movement resulting in displacement, which most other terms do not. In that sense it is useful, underused, and perhaps revelatory.

Rather than approach the city as simply a site of growth, processes, and developments, the contributors to this volume treat it as the recipient of attentions. The work draws on a wide variety of geographical sites and historic monuments in order to explore this concept, examining and challenging current urban theories. It seeks to highlight both the power of The Global City and the current vulnerability and fragility of urban culture, exploring the city as a recipient and a culprit in relation to issues including terrorism and urban warfare, the latest cyclical failure of global financial markets, and the relatively new spectre of environmental unsustainability.

Offering a unique and relevant contribution to the literature, this work will be of great interest to scholars of urban theory, international relations, postcolonial politics and military studies.

Ryan Bishop is Professor of Global Art and Politics and co-Director of the Winchester Centre for Global Futures in Art Design & Media, Winchester School of Art, University of Southampton

Gregory Clancey is an Associate Professor of History at the National University of Singapore, and the Master of Tembusu College.

John W P Phillips is Associate Professor in the Department of English Language and Literature at The National University of Singapore.