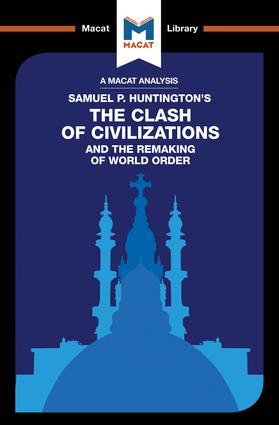 The Clash of Civilizations and the Remaking of World Order

The end of the Cold War, which occurred early in the 1990s, brought joy and freedom to millions. But it posed a difficult question to the world's governments and to the academics who studied them: how would world order be remade in an age no longer dominated by the competing ideologies of capitalism and communism? Samuel P. Huntington was one of the many political scientists who responded to this challenge by conceiving works that attempted to predict the ways in which conflict might play out in the 21st century, and in The Clash of Civilizations he suggested that a new kind of conflict, one centred on cultural identity, would become the new focus of international relations. Huntington's theories, greeted with scepticism when his book first appeared in the 1990s, acquired new resonance after 9/11.

The Clash of Civilizations is now one of the most widely-set and read works of political theory in US universities; Huntington's theories have also had a measurable impact on American policy. In large part, this is a product of his problem-solving skills. Clash is a monument to its author's ability to generate and evaluate alternative possibilities and to make sound decisions between them. Huntington's view, that international politics after the Cold War would be neither peaceful, nor liberal, nor cooperative, ran counter to the predictions of almost all of his peers, yet his position – the product of an unusual ability to redefine an issue so as to see it in new ways – has been largely vindicated by events ever since.

Who was Samuel Huntingdon?

What does The Clash of Civilizations and the Remaking of World Order Say?

Why does The Clash of Civilizations and the Remaking of World Order Matter?