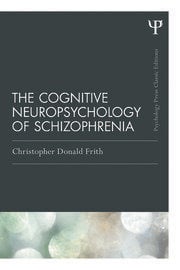 This is a classic edition of Christopher Frith’s award winning book on cognitive neuropsychology and schizophrenia, which now includes a new introduction from the author. The book explores the signs and symptoms of schizophrenia using the framework of cognitive neuropsychology, looking specifically at the cognitive abnormalities that underlie these symptoms. The book won the British Psychological Society book award in 1996, and is now widely seen as a classic in the field of brain disorders.

The new introduction sees the author reflect on the influence of his research and the subsequent developments in the field, more than 20 years since the book was first published.

Christopher D. Frith is Emeritus Professor at University College London, UK, Visiting Professor at Aarhus University, Denmark, and Quondam Fellow of All Souls College, University of Oxford, UK. In 2009 he was awarded the Fyssen Foundation Prize for his work on neuropsychology.

'This is perhaps the deepest analysis of schizophrenic thought ever advanced, and one of the most interesting applications of cognitive science to psychopathology'.
- Steven Pinker, Johnstone Professor of Psychology, Harvard University, USA and the author of How the Mind Works and The Stuff of Thought

'This book, first published in 1992, laid the foundations for then new field of cognitive neuropsychiatry. Its major theme was that schizophrenia is not an appropriate object for scientific study, and that what should be studied instead are individual signs and symptoms such as hallucination or delusion. The major funding body for mental health research in the USA, the National Institutes of Mental Health, has at last caught up with what Frith had so cogently demonstrated, and is realigning its funding priorities accordingly. So the book is as important now as it was then.'
- Max Coltheart, Department of Cognitive Science and Centre for Cognition and its Disorders, Macquarie University, Australia

‘I came across this book as a young clinician, frustrated by the gulf between the methods of science and the complex, often terrifying, experiences that bedeviled patients. I was immediately inspired by how elegantly and humanely Frith bridged this gap, making it seem possible to understand these experiences and explore them scientifically. In the intervening years, the ideas in this book have shown their worth, providing the foundations for a neuroscience of psychosis.’
- Paul Fletcher, Bernard Wolfe Professor of Health Neuroscience, University of Cambridge, UK

‘For decades, philosphers of mind stuck to the dogma that schizophrenia was a psychiatric condition that remained, in part, "un-understandable", because many psychotic symptoms were inacessible through empathy ("Einfühlung"). This position has hampered progress in assigning an interpersonal dimension to the many different phenotypic manifestations of schizophrenia. It was Chris Frith's work, then, that contributed fundamentally to a novel view on psychotic experiences, suggesting that these phenomena can be understood as dysfunctional ways to connect with and reflect upon one's own and other minds to form a coherent picture of the social world. The Cognitive Neuropsychology of Schizophrenia is a timeless, must-read volume for all those who work with patients with schizophrenia and want to know what is going on in the patients' minds.'
- Martin Brüne, LWL University Hospital, Ruhr University Bochum, Germany

'The Cognitive Neuropsychology of Schizophrenia, first published in 1992, is a classic, not only because it laid out an innovative understanding of some core schizophrenic symptoms, but also because it laid the groundwork for many recent theoretical developments in this area. Frith’s new introduction provides an insightful overview of related advancements since the original publication, in conceptual distinctions, in understanding brain function, in the use of brain imaging technology, and in specific research areas such as social cognition.'
- Shaun Gallagher, Department of Philosophy, University of Memphis, USA