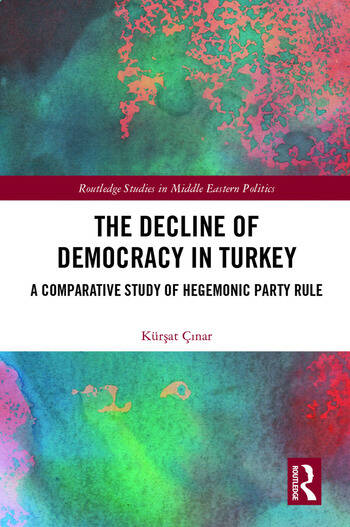 The Decline of Democracy in Turkey: A Comparative Study of Hegemonic Party Rule

This book explores the roots of the decline of democracy and the rise of hegemonic parties in Turkey, by comparing the Justice and Development Party (AKP) with other comparable cases throughout the world.

Offering a novel analysis in the rise of hegemonic parties, this book incorporates the analysis of state-society relations and institutionalist approaches. A hegemonic party is a single political party that dominates the scene in multi-party elections for extended periods of time. Focusing on the cases of Turkey, Azerbaijan, Malaysia, Russia and other countries through the Middle East, Asia, Latin America, Africa and Europe, the book proves that hegemony building is possible through the combination of societal and institutional factors at the individual, local, and national levels. Multilingual comparative content analysis, rigorous statistical tests, and in-depth elite-level interviews support this theory, based on an extensive fieldwork analysis.

Analysing contemporary as well as historical cases of hegemonic parties, the volume will be of interest to researchers and students in a broad range of areas including democratization, political parties and Turkish politics.

4. Political, Socioeconomic and Demographic Determinants of the Emerging AKP Hegemony – A Quantitative Analysis

5. Local Dynamics behind the AKP Hegemony: Findings from Field

6. Hegemonic Parties in Comparative Perspective: Insights from Azerbaijan, Malaysia, Russia, and Beyond

Kürşat Çınar is an Assistant Professor at the Middle East Technical University, Ankara. Dr. Cinar is Fulbright and EU Marie Curie Alumnus. His work has appeared in respected journals such as Democratization, Politics & Gender, and Political Studies. He is also an Associate Editor of Politics & Gender. He works on political parties, development, and gender politics.

Dr. Çınar’s book is an important contribution to Turkish Political Science, not only because it is one of the very few studies on political parties per se, but also because of multiple methodologies and multiple levels of analysis he undertakes for his study. Reading through the book, we see that he makes use history content analysis, empirical findings, survey results as well as statistical data meticulously. His wide knowledge on theory enables him to undertake multiple levels of analysis, including party organization (from leadership to membership structures), ideology, and different form of political participation (from voting behavior to clientelism). Then he finishes with comparative example from three countries. It is this multifacetedness that makes the book valuable and interesting.
Ayşe Ayata, Professor of Political Science & Public Administration, Middle East Technical University

This remarkably rich study, theoretically grounded and methodologically rigorous and innovative, is a major contribution to a burgeoning literature on contemporary Turkey. It goes far beyond simple description to provide a compelling analysis of how the AKP has both attracted and retained support. In particular, Çınar excels at showing how the AKP has bonded with voters at the local level, utilizing both its religious appeal as well as its ability, literally, to deliver the goods. This is an important work that engages with numerous literatures in political science and deserves wide readership.
Paul Kubicek, Professor of Political Science, Oakland University and Editor of Turkish Studies

The Decline of Democracy in Turkey is a well-written book which will be of interest to scholars who want to expand their horizons concerning the decisive factors that shape the rise of hegemonic parties. By focusing on the case of [the] Justice and Development Party in Turkey, Çınar enhances our understanding of hegemony building in general and offers a penetrating analysis of party politics in contemporary Turkey.
Ziya Öniş, Professor of International Political Economy, Koç University

The Decline of Democracy in Turkey: A Comparative Study of Hegemonic Party Rule

offers the readers a systematic analysis of the pro-Islamist Justice and Development Party’s ascendancy and dominance in Turkish politics. This meticulously researched book explains the political, social, and economic forces that contributed to the JDP’s meteoric rise in electoral competition and its consolidation of power as a hegemonic party that has increasingly undermined democratic institutions and practices. Çınar has written an insightful and informative book that also advances an original theory on the emergence and maintenance of hegemonic parties in world politics. Based on a wealth of empirical evidence and findings of field research in local politics, this book makes an important contribution to the comparative study of hegemonic party rule and to the literature on contemporary Turkish politics.
Sabri Sayarı, Professor of Political Science, Sabancı University