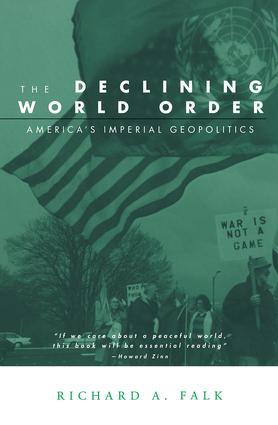 This work delineates the impact of terrorism--and the American response--on the basic structure of international relations, the dimming prospects for global reform and the tendency to override the role of sovereign territorial states. Falk examines the changing role of the state, the relevance of institutions, the role of individuals and the importance of the worldwide religious resurgence, with its positive and negative implications. He also considers the post-modern geopolitics of the Bush presidency, with its emphasis on the militarization of space, the control of oil in the Middle East, and its reliance on military capabilities so superior to that of other states as to make any challenge impractical.

"Richard Falk, in THE DECLINING WORLD ORDER, brings to the post-9-11 world the breadth of vision and the moral commitment that he has shown us over the years in his various writings. He skillfully combines theoretical analysis with empirical data to analyze the 'war on terrorism' and 'globalization' in a fresh and bold way. If we care about a peaceful world, this book will be a great help.

"Over the past 30 years, Richard Falk has emerged as an unrivaled source of insight and clarification on questions of world order and the normative functions of international law. In the present volume, he excels himself, offering the most straightforward and trenchant analysis yet of the implications attending the Bush administration's drive to military and economic dominance on a global scale. Agree with him or not, Falk's book demands to be read by anyone wishing to understand the forces now shaping our collective destiny

"With superb insight, originality and verve, Richard Falk provokes us to think about a new regionalism shaped by an emerging global civil society and existing international institutions, and invigorated by human rights principles and religious tolerance. His shrewd observations on the Westphalian order and beyond greatly inform the human rights debate, as the world slips toward a geopolitical morass.

." -- Micheline Ishay, author of The History of Human Rights

"Over a lifetime, Richard Falk has been one of our most insightful critics of the foreign policy of the United States. He has given us both powerful critiques but also inspiring visions of the possibility of a peaceful global world order. In The Declining World Order, Falk with great intellectual force shows us how dangerous to all of us America's geopolitics are. This is a must read for anyone who seeks to seriously grapple with the future of our world.

"In a time of much talk and even more confusion about the meaning of state sovereignty and globalization, Richard Falk provides a clear framework for understanding U.S. hegemony and its implications for world order. One of the preeminent international legal scholars of our time, Falk provides both a thorough academic analysis of international relations today and a moving call to restore democracy and avert fascism on a global scale.

Richard Falk is Milbank Professor of International Law Emeritus at Princeton University where he was a member of the faculty for forty years. He has been a Visiting Professor in the Global Studies Program of the University of California at Santa Barbara for the last three years. His most recent books are THE GREAT TERROR WAR (2003) and RELIGION AND HUMANE GLOBAL GOVERNANCE (2001). He serves as Chair of the Board for the Nuclear Age Peace Foundation and is Chair of the Editorial Board of World Editorial and International Law. He is on the Editorial Board of The Nationa and an Honorary Editor of the American Journal of International Law.