The EU and Federalism
Polities and Policies Compared 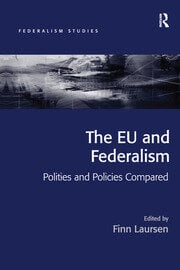 The EU and Federalism: Polities and Policies Compared

Tracing the evolution of federalist theory and the European Union (EU), an international line up of distinguished experts debate the pros and cons of treating the EU in a comparative context and ask whether a constitutional equilibrium has been reached in the EU. They examine policymaking or modes of governance in the areas of employment, health, environment, security and migration, comparing the EU's policies with policies of both international organisations like NATO, OECD and federal states such as Canada, Japan and South Africa.

Finn Laursen holds the Canada Research Chair in European Union (EU) Studies at the Dalhousie Arts and Social Sciences Faculty and is Professor in the Department of Political Science.

'Finn Laursen has produced a welcome addition to the literature on EU federalism by applying the concept to a number of policy sectors and by comparing EU policies with the policies of other international organisations and federal states. This rigorous examination, produced by an outstanding international team of scholars, is an impressive achievement that will become required reading in the field of EU federalism.' Emil J. Kirchner, University of Essex, UK 'Though many often ask what the relationship is between the EU and federalism, this question is rarely studied in contemporary European integration studies. This volume provides answers to many important questions such as: Is the EU a federal state? Is it a state or an intergovernmental organization? Is the EU a sui generis organization? How do mature federations differ from the EU in various areas of policy-making. By providing various background chapters on various aspects of federalism, as well as case studies on different types of policy-making, this book fills a major gap in the literature on federalism and European integration. This well-written book contains chapters by many leading authors; it is a pleasure to read.' Amy Verdun, University of Victoria, Canada 'Such approaches to EU politics and policy are to be welcomed in a field that has for too long eschewed the explicit comparative route - especially that which involves direct comparisons with federal systems. To this end, the volume represents a contribution to the growing literature that seeks to shed light on the EU’s institutional development through comparative assessment... both welcome and informative... there are some valuable contributions - especially the three EU/Canadian case studies and one on EU/OECD benchmarking - that are well written and certainly deliver on the book’s federal and comparative promise.' Publius: the Journal of Federalism