The Ethics of Teaching 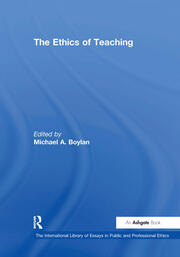 The Ethics of Teaching

Education is at a crossroads. While bureaucrats and teachers fight over the best way to structure and deliver education to students, much of the friction generated relates to the different conceptions of what education is about in the first place. The crisis in education is therefore of key importance and demands careful attention in order to formulate the best possible response. But before policies can be formulated, there needs to be a clear agreement on what education should be about. To this end, this collection of previously published essays facilitates just such discussion. The anthology is designed to give a snapshot of the seminal work in the philosophy of education and the input of ethical issues upon that work. It provides an authoritative tour of the profession and pivotal issues that confront it, written from a variety of international and critical perspectives.

'...a highly useful and comprehensive resource for any research institution with an emphasis in education...' IFLA Bulletin