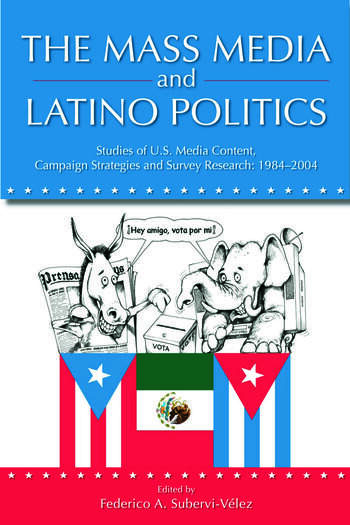 The Latin-American population has become a major force in American politics in recent years, with expanding influences in local, state, and national elections.  The candidates in the 2004 campaign wooed Latino voters by speaking Spanish to Latino audiences and courting Latino groups and PACs. Recognizing the rising influence of the Latino population in the United States, Federico Subervi-Velez has put together this edited volume, examining various aspects of the Latino and media landscape, including media coverage in English- and Spanish-language media, campaigns, and survey research.

"The Mass Media and Latino Politics comes at an important time when the growing Latino population--in all its diversity and complexity--is reshifting the ways in which we imagine the intersection of politics, culture, and media. The book should be required reading for students, scholars and practitioners interested in studying an important area of the US political landscape, but more importantly, for those interested in developing meaningful and effective political coverage for and about Latinos. The edited volume by Federico Subervi-Vélez has the breadth and depth for more deeply understanding the importance of mass media in the political and cultural life of Latinos, and as a result, the book makes an important contribution to studies of political communication."

"This volume is a must read for scholars, teachers and civic office holders who seek to understand the interrelationships between Latinos, media and politics. It is a concentrated text with insights on audiences and media content that all political communication faculty and students should read. Particularly in today’s charged campaign atmosphere this volume holds a special value because it addresses issues of ethnicity/race, language and culture in ways in which other books cannot. Few political communication specialists can tackle the past, present and future of the mass media as it pertains to Latinos and politics."

"The chapters in this volume by political scientists and communication researchers offer both scholarly evidence and insightful analyses of the roles members of this ethnic group and the media directed toward them have played, are playing and will continue to play in influencing the U.S. electoral process… the authors take a more systematic approach in examining the ways in which political campaign strategies, core messages and targeted campaigns have been shaped by the growing political power of Latinos and the influence of the media that reach them, especially in key battleground states during national elections. This multidimensional approach in examining campaigns across several decades represents a significant contribution to the body of knowledge and analysis that is available to shape our understanding of the influence of media on the political attitudes and behaviors of Latinos in the United States."