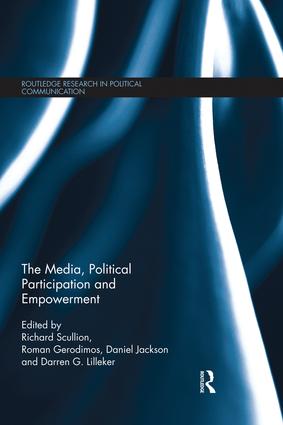 The Media, Political Participation and Empowerment

Technological, cultural and economic forces are transforming political communication, posing challenges and opportunities for politicians and media organisations, while at the same time many governments and civil society express concerns about the extent and nature of political empowerment and civic engagement.

This book offers an international perspective on current thinking and practice about civic and audience empowerment, focusing on the ways and means through which media can empower or dis-empower citizens as audiences. It features theoretical and empirical chapters that draw specific attention to a reappraisal of the theories, methods and issues that inform our understanding of citizens and audiences in contemporary politics. The authors address the following questions:

With examples from the UK, USA, Holland, France, Germany, The Middle East, South Africa and Mexico, this innovative volume will be of interest to students and scholars of political science, marketing, journalism, cultural studies, public relations, media and international relations.