The Politics of International Organizations
Views from insiders 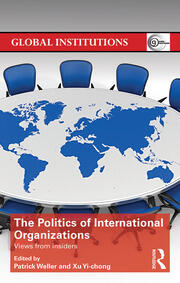 The Politics of International Organizations: Views from insiders

International organisations (IOs) often receive a bad press, seen as intrusive, domineering and unresponsive to the needs of the people and countries they are meant to serve. The best way to understand the operation of these international organisations is to bring together those who represent their countries at IOs and those who have been working at IOs at various capacities and then to listen to their experiences.

Providing a well-informed, innovative and consistently structured analysis of IOs this work will be of interest to students and scholars of international relations, international organizations and global governance.

Patrick Weller and Xu Yi-chong are professors in the School of Government and International Relations at Griffith University.

Patrick Weller has been writing about political executives for the past 40 years. Among his books on Australian politics are: Can Ministers Cope? (1981, co-author), Malcolm Fraser Prime Minister (1989), Dodging raindrops: John Button A Labor Life (1999), Australia’s Mandarins (2001), Don’t tell the prime minister (2002), Cabinet Government in Australia (2007), Learning to be a Minister (2010, co-author) and From Post box to Powerhouse: a Centenary History of the Department of the Prime Minister and Cabinet (2011, co-author).

His comparative books include First among Equals: prime ministers in Westminster systems (1985), The Hollow Crown (co-edited 1997), The changing world of top officials (co-edited 2001), Westminster Legacies (co-edited, 2005) and Westminster Compared (co-authored 2009). He has acted as a consultant for state and federal governments. In 2009-10 he was a member of the Prime Minister’s Advisory Group on Reform of Australian Government Administration.