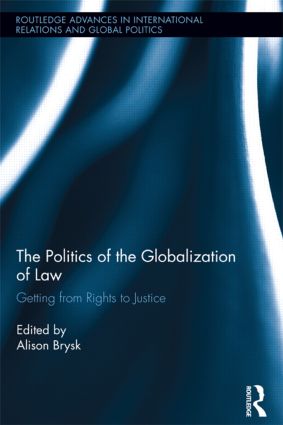 The Politics of the Globalization of Law

Getting from Rights to Justice, 1st Edition

The globalization of law has the potential to move the international human rights regime from the generation of norms to the fulfillment of rights, through direct enforcement, reshaping state policy, granting access to civil society, and global governance of transnational forces. In this volume, an international and interdisciplinary team of scholars explores the development of new norms, mechanisms, and practices of international legal accountability for human rights abuse, and tests their power in a series of "hard cases." The studies find that new norms and mechanisms have been surprisingly effective globally, in terms of treaty adherence, international courts, regime change, and even the diffusion of citizenship rights, but this effect is conditioned by regional and domestic structures of influence and access. However, law has a more mixed impact on abuses in Mexico, Israel-Palestine and India. Brysk concludes that the globalization of law is transforming sovereignty and fostering the shift from norms to fulfillment, but that peripheral states and domains often remain beyond the reach of this transformation.

Theoretically framed, but comprised of empirical case material, this edited volume will be useful for both graduate students and academics in law, political science, human rights, international relations, global and international studies, and law and society.

1. The Politics of the Globalization of Law; Alison Brysk and Arturo Jimenez-Bacardi Part I: The Globalization of Law And Human Rights 2. Treaties, Constitutions, and Courts: The Critical Combination; Wayne Sandholtz 3. The International Criminal Court: Globalizing peace or justice?; Tony Smith and Antonio Gonzalez 4. Global diffusion and the role of courts in shaping the human right to vote; Ludvig Beckman 5. From Pirates to Pinochet: universal jurisdiction for torture; Mark Berlin 6. Courts, advocacy groups, and human rights in Europe; Rachel Cichowski Part II: Hard cases: from rights to justice? 7. The Power and Limits of International Law: Challenging the Bush Administration’s Extra-Legal Detention System; Arturo Jimenez-Bacardi 8. States of emergency vs. courts in Latin America; Claire Wright 9. Law, rights, and barriers in the Israel-Palestine conflict; Gershon Shafir 10. Non-state actors as violators in Mexico: A hard case for global human rights; Alejandro Anaya 11. Extraordinary laws and torture in India in an era of globalization; Jinee Lookaneeta

Alison Brysk holds the Mellichamp Chair in Global Governance at the University of California, Santa Barbara. She is the author or editor of eight previous books on human rights, including Globalization and Human Rights, Human Rights and Private Wrongs, People Out of Place, and From Human Trafficking to Human Rights. She has held visiting posts in Argentina, Canada, Ecuador, France, India, Spain, and Sweden, among others.