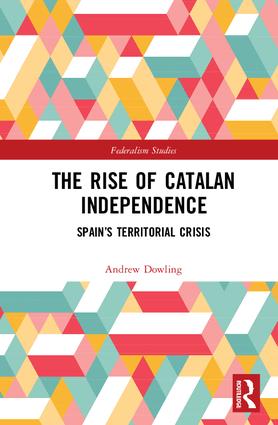 The Rise of Catalan Independence

As recently as the mid-2000s, Catalonia was described and analysed by scholars as exhibiting a non-secessionist nationalism and was seen within Europe and beyond as a role model for successful devolution which had much to teach other parts of the world. The Spanish state seemed to be on a journey towards an authentic federal order and was generally admired. However, the new century has been marked by an ever-growing independence movement, with 47.8 per cent of Catalonia voting in favour of independence in September 2015. Pro-independence mobilization has produced a rupture in political relations with the rest of Spain leading to a sovereignty struggle with Madrid.

This book explores how an accumulation of long-, medium- and short-term factors have produced the current situation and why the Spanish territorial model has been unable or possibly, unwilling, to respond. The Catalan question is not purely a Spanish problem: it has direct implications for the traditional nation-state model, in Europe and beyond.

Chapter 3: The crisis of Catalanism

Chapter 4: Constructing a movement for independence

Chapter 5: Catalonia, north of the south, south of the north: The economic crisis and its consequences

Andrew Dowling is a Senior Lecturer in Hispanic Studies at Cardiff University. He has previously written Catalonia since the Spanish Civil War: Reconstructing the Nation (2012), which was published in Catalan as La Reconstrucció Nacional de Catalunya, 1939-2012 (2013).

The end of the Cold War profoundly altered the dynamics between and within the various states in Europe and the rest of the World, resulting in a resurgence of interest in the concept of federalism. This shift in balance has been further fuelled by the increase in the number of conflicts arising from the disaffection of the diverse ethnic or religious minorities residing within these states (e.g. Sudan, Iraq). Globalization is forcing governments not only to work together, but also to reconsider their internal roles as guarantors of economic growth, with regions playing the major part. Federalism Studies offers academics a complete and in-depth understanding of federalism and intergovernmental relations in historical, theoretical and comparative contexts. Intended to be international and interdisciplinary in scope, the books in the series are designed to build a common framework for the constructive analysis of federalism. Contributions are welcome on topics which explore federalism as a theory; as a political system and as a form of conflict management.