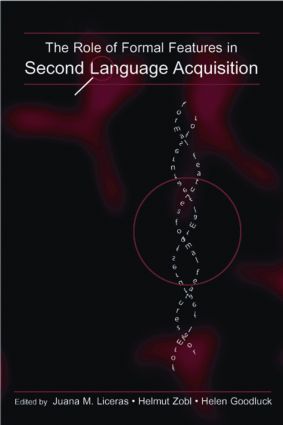 The Role of Formal Features in Second Language Acquisition

Using Chomsky's minimalist program as a framework, this volume explores the role of formal (or functional) features in current descriptions and accounts of language acquistion. In engaging, up-to-date articles, distinguished experts examine the role of features in current versions of generative grammar and in learnibility theory as it relates to native, non-native, and impaired acquisition.

The Second Language Acquisition Research series presents and explores issues bearing directly on theory construction and/or research methods in the study of second language acquisition. Its titles (both authored and edited volumes) provide thorough and timely overviews of high-interest topics, and include key discussions of existing research findings and their implications. A special emphasis of the series is reflected in the monographs dealing with specific data collection methods or instruments.  Each of these monographs addresses the kinds of research questions for which the method/instrument is best suited, offers extended description of its use, and outlines the problems associated with its use. The volumes in this series will be invaluable to students and scholars alike, and perfect for use in courses on research methodology and in individual research.