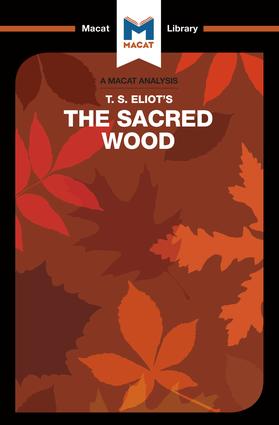 The essay for which The Sacred Wood is primarily remembered is one of the most famous pieces of criticism in English: “Tradition and the Individual Talent” helped to re-orientate arguments about the study of literature and its production by redefining the nature of tradition and the artist's relation to it.At a time when the word “traditional” had become a way of damning with faint praise by reference to the past, Eliot reinterpreted the term to mean something entirely different. It is not, he argues, something just “handed down,” but, instead, a prize to be obtained “by great labour,” not least in the making of a huge effort of understanding how the past fits together. Seen thus, Eliot suggests, a literary and artistic tradition “has a simultaneous existence and composes a simultaneous order” – and it is not just past, but present as well. For Eliot, “art never improves,” but only changes, and each part of the tradition is constantly being reinterpreted in light of what is added to the whole. The role of the poet, in Eliot's view, is to subjugate their own personality, and become “a receptacle,” in which “numberless feelings, phrases, images… can unite to form a new compound.” Redefining the issue of poets' relations to the past in this new way is a fine example of creative thinking, and Eliot’s ability to connect existing concepts in new ways was what gave weight to the argument that he advanced: that poets cannot succeed without understanding that they are taking their place on a continuum that stretches back to all their predecessors, and incorporate the ideas, strengths and failings of the entire body of work that those poets represented.

What does The Sacred Wood: Essays on Poetry and Criticism Say?

Why does The Sacred Wood: Essays on Poetry and Criticism Matter?

Rachel Teubner teaches in the Department of Religious Studies at the University of Virginia. Her work focuses on the intertextual relationships between religious and literary works, and the representation of religious thought in poetry. She is completing work on a PhD focused on representations of religious thought and experience in literature, particularly in poetry. This includes interpreting authors such as Dante and Hopkins as readers of classical sources, as well as considering such 20th century poetic respondents to Dante as T.S. Eliot and James Merrill.