The Second-Person Perspective in Aquinas’s Ethics
Virtues and Gifts 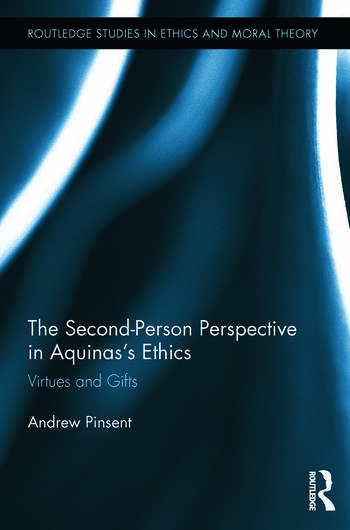 The Second-Person Perspective in Aquinas’s Ethics: Virtues and Gifts

Thomas Aquinas devoted a substantial proportion of his greatest works to the virtues. Yet, despite the availability of these texts (and centuries of commentary), Aquinas’s virtue ethics remains mysterious, leaving readers with many unanswered questions.

In this book, Pinsent argues that the key to understanding Aquinas’s approach is to be found in an association between: a) attributes he appends to the virtues, and b) interpersonal capacities investigated by the science of social cognition, especially in the context of autistic spectrum disorder. The book uses this research to argue that Aquinas’s approach to the virtues is radically non-Aristotelian and founded on the concept of second-person relatedness.

To demonstrate the explanatory power of this principle, Pinsent shows how the second-person perspective gives interpretation to Aquinas’s descriptions of the virtues and offers a key to long-standing problems, such as the reconciliation of magnanimity and humility. The principle of second-person relatedness also interprets acts that Aquinas describes as the fruition of the virtues. Pinsent concludes by considering how this approach may shape future developments in virtue ethics.

1. The Mystery of Aquinas’s Virtue Ethics  2. The Gifts as Second-Personal Dispositions  3. Virtues and the Second-Person Perspective  4. The Fruition of the Virtues and Gifts  5. Conclusions and Implications

Andrew Pinsent is Research Director of the Ian Ramsey Centre for Science and Religion, University of Oxford.

"This is a work of lasting value and deep and careful scholarship that makes a serious contribution to three fields at once: the exegesis of Aquinas, theological ethics and philosophical virtue ethics. Andrew Pinsent has written a book that no one working in these areas will be able to afford to ignore, and which makes a real contribution, in particular, to getting the study of Aquinas’s virtue ethics, as something radically distinct from Aristotelian virtue ethics, firmly onto the academic agenda." – Timothy Chappell, Professor of Philosophy, Open University, UK

"In this intriguing re-reading of Thomas’s virtue ethics, Andrew Pinsent firmly resists the reduction of Thomist ethics to a mere variation on Aristotelian ethics, and shows with meticulous attention to the texts how Thomas's theology of grace and of the 'gifts' vitally transforms his understanding of virtue. The discussion is animated by reference to contemporary analyses of ‘second-person relatedness’ in social science, a move which is bound to be contentious but is remarkably thought-provoking." – Sarah Coakley, Norris-Hulse Professor of Divinity, University of Cambridge, UK

"This is an exhilarating book. If Dr. Pinsent’s central thesis about the radically non-Aristotelian character of Aquinas’s theory is right, he has given us a fresh and important insight into the latter’s understanding of the virtues and a greater appreciation of its genius. If it is wrong, we are still left with a treasure trove of fascinating ideas that might be applied to the interpretation of both authors, but especially Aquinas." – Kevin Flannery, Professor of Philosophy, Pontifical Gregorian University, Italy

"Refreshingly, Andrew Pinsent, a physicist and Thomistic philosopher, argues for a major revision in our understanding of Aquinas’s virtue ethics. …Pinsent uses new research in contemporary social cognition to help illuminate and provide a unifying principle for understanding features in Aquinas that are quite unparalleled in Aristotle." – Corey Miller, Indiana University, USA in American Catholic Philosophical Quarterly

"Pinsent's book is a valuable contribution to contemporary Thomistic ethics, and virtue theory more generally. …The book provides genuine insights into some of the central preoccupations of neo-Kantians such as Stephen Darwall and Christine Korsgaard and neo-Aristotelians such as Michael Thompson and Candace Vogler. We can hopefully look forward to these insights being fleshed out in future work by Pinsent and others." – Matthew B. O’Brien in Notre Dame Philosophical Reviews