Since the publication of its Shingo Prize-winning predecessor, TWI programs have seen steady growth in usage. As a true understanding of Standard Work has developed, the need for the TWI skills as fundamental tools to achieve Lean objectives has been solidified.

The TWI Workbook: Essential Skills for Supervisors, Second Edition has been completely updated to the latest terminology and practice. This edition includes revised forms and tools, as well as new examples that illustrate current day TWI practice. Emphasizing the importance of accident and injury prevention, this edition includes an entirely new section on Job Safety, a fourth TWI module that was developed in Japan using the identical TWI methodology of the original three programs introduced in the original work. This updated edition includes new chapters on:

In addition to a new chapter on the TWI problem-solving methodology, this edition contains a new introduction with a more complete description of how TWI was reintroduced into American industry, including detailed information on the contribution TWI made at Toyota that was not available when the original book was published.

Focusing on how the TWI skills create and support standardized work as the foundation for Lean and continuous improvement, the book includes detailed explanations on how to determine important steps and find key points that lead the way to standardized work. A new section on making a balanced breakdown has also been added, with new examples of Job Instruction breakdowns. The book also features a new conclusion that compares the historical role of TWI with what companies today are experiencing using the TWI methodology.

Patrick Graupp began his training career at the Sanyo Electric Corporate Training Center in Japan after graduating with highest honors from Drexel University, Philadelphia, Pennsylvania, in 1980. There he learned to deliver Training Within Industry (TWI) from his mentor Kazuhiko Shibuya. Mr. Shibuya was trained by Kenji Ogawa, who was trained by the four TWI, Inc. trainers sent from the United States to help Japan rebuild industry in 1951. Patrick earned an MBA from Boston University, Boston, Massachusetts, while leading Sanyo’s global training effort. He was later promoted to the head of human resources for Sanyo North America Corp. in San Diego, California, where he settled.

Patrick partnered with Bob Wrona in 2001 to conduct TWI pilot projects in Syracuse, New York, that became the foundation for the TWI Institute, which has since trained a rapidly expanding global network of more than 1000 certified trainers who are now delivering TWI training in the manufacturing, health care, construction, energy, and service industries in the United States and around the globe. The first edition of their book The TWI Workbook: Essential Skills for Supervisors was a Shingo Research and Professional Publication Prize Recipient for 2007.

Robert J. Wrona began his manufacturing career at Chevrolet in Buffalo, New York, where he was promoted to shop floor supervisor after earning a BS from Canisius College, Buffalo, New York. He moved on to Kodak in Rochester, New York, where he became interested in organizational development while earning his MBA from the Rochester Institute of Technology, New York. Bob joined a high-volume retail drugstore chain in Syracuse, New York, when it was a 12-store operation. He standardized store operating procedures, developed internal training, and reorganized central distribution as the company profitably grew into a regional chain of 140 in 11 years.

"As you probably know, Robert Wrona has been the primary driving force behind spreading the Training Within Industry (TWI) concepts in North America and around the globe for the past couple of decades, in conjunction with the TWI Institute. In Patrick Graupp you have, without a doubt, the finest TWI master instructor in the English language around the world. The first edition of their workbook was of tremendous value, and the latest version is even better. ... Spend time carefully thinking about the first principles and fundamental elements in this material, like Taiichi Ohno and others inside of Toyota did more than 60 years ago. The fundamentals have provided value to American companies before and after World War II. The concepts have provided decades of value to Toyota and other companies around the world as well. I am certain if you study the content and apply it diligently and patiently, you will find success as well."
—From the Foreword by Art Smalley, President, Art of Lean, Inc. 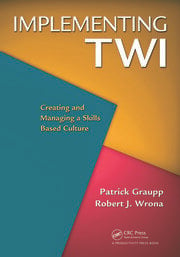 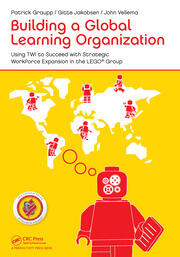