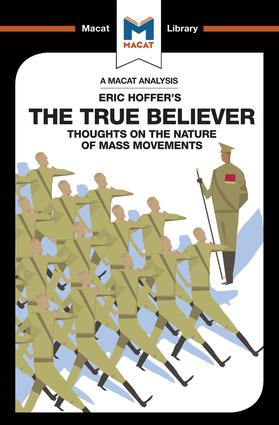 Thoughts on the Nature of Mass Movements, 1st Edition

Eric Hoffer’s The True Believer: Thoughts on the Nature of Mass Movements is one of the most widely read works of social psychology written in the 20th-century. It exemplifies the powers of creative thinking and critical analysis at their best, providing an insight into two crucial elements of critical thinking.

Hoffer is likely to go down in history as one of America’s great creative thinkers – a writer not bound by standard frameworks of thinking or academic conventions, willing to beat his own path in framing the best possible answers to the questions he investigated. An impoverished, largely unschooled manual laborer who had survived the worst effects of the Great Depression in the United States, Hoffer was a passionate autodidact whose philosophical and psychological education came from omnivorous reading. Working without the help of any mentors, he forged the fearsomely creative and individual approach to problems demonstrated in The True Believer.

The book, which earned him his reputation, examines the different phenomena of fanaticism – religious or political – and applies Hoffer’s analytical skills to reveal that, deep down, all ‘true believers’ display the same needs and tendencies, whatever their final choice of belief. Incisive and persuasive, it remains a classic.

What does The True Believer: Thoughts on the Nature of Mass Movements Say?

Why does The True Believer: Thoughts on the Nature of Mass Movements Matter?

Dr. Jonah S. Rubin holds a PhD in anthropology from the University of Chicago, focusing on memory and death in post-Franco Spain. He is currently a visiting professor in anthropology at Bard College, New York.