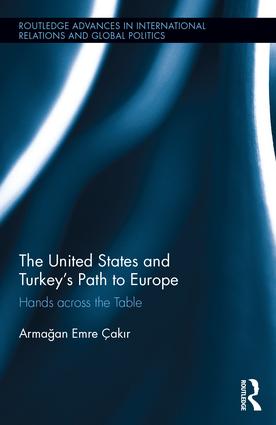 The United States and Turkey's Path to Europe

Hands across the Table, 1st Edition

Turkey’s relations with the European Union is one of the most enigmatic topics in the European Studies literature. This country, kept at bay by Europeans for centuries, once came unexpectedly close to full-membership. The progress Turkey recorded in its European quest is difficult to account for with either Turkey’s performance or the positive attitude of the Europeans towards Turkey.

In this book, Armağan Emre Çakır chronicles over six decades of US involvement in EU-Turkey relations. Shedding new light on the reasons, characteristics, transformation and relative importance of the US influence on Turkey-EU relations, he argues that Turkey’s quest for EU membership would not have advanced this far without the support from the United States. Çakır’s hypotheses and findings are grounded in original research that, among other things, includes interviews conducted on both sides of the Atlantic with key players, archival material and newspaper articles.

The valuable insights presented in this book make for a much needed alternative history of this volatile relationship.

'Dr. Cakir’s work masterfully demonstrates that Turkey’s EU accession is more than the aggregate sum of its parts: Turkey’s EU membership process, though stalled currently, would not be here today if not for the United States. Washington has helped open Europe’s doors to Turkey and all three actors have a role in keeping that door ajar. In this book, Dr. Cakir provides great historical analysis explaining the background of Turkey’s European vocation: Ankara’s EU path to Brussels goes, at least in part, through Washington.' - Soner Çağaptay, The Washington Institute for Near East Policy, USA

'In this detailed historical analysis, Armagan Emre Cakir provides us with the first elaborate account of the US-EU-Turkey triangle, which so far has lacked the academic attention it deserves. One does not have to agree with Cakir's neorealist frame to find a wealth of empirical detail in this study that makes it a highly informative read. His conclusions will frame the debate for the foreseeable future.' - Thomas Diez, University of Tübingen, Germany

Armağan Emre Çakır is an associate professor at the European Union Institute of Marmara University, Turkey. His research focuses on theories of European integration, and EU–Turkey relations.