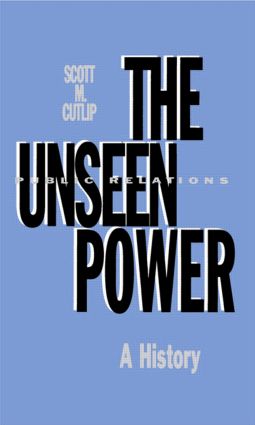 Based largely on primary sources, this book presents the first detailed history of public relations from 1900 through the 1960s. The author utilized the personal papers of John Price Jones, Ivy L. Lee, Harry Bruno, William Baldwin III, John W. Hill, Earl Newsom as well as extensive interviews -- conducted by the author himself -- with Pendleton Dudley, T.J. Ross, Edward L. Bernays, Harry Bruno, William Baldwin, and more. Consequently, the book provides practitioners, scholars, and students with a realistic inside view of the way public relations has developed and been practiced in the United States since its beginnings in mid-1900.

For example, the book tells how:

* President Roosevelt's reforms of the Square Deal brought the first publicity agencies to the nation's capital.

* Edward L. Bernays, Ivy Lee, and Albert Lasker made it socially acceptable for women to smoke in the 1920s.

* Ben Sonnenberg took Pepperidge Farm bread from a small town Connecticut bakery to the nation's supermarket shelves -- and made millions doing it.

* Two Atlanta publicists, Edward Clark and Bessie Tyler, took a defunct Atlanta bottle club, the Ku Klux Klan, in 1920 and boomed it into a hate organization of three million members in three years, and made themselves rich in the process.

* Earl Newsom failed to turn mighty General Motors around when it was besieged by Ralph Nader and Congressional advocates of auto safety.

"…[Cutlip] translates a lifetime of experience and teaching into a comprehensive, readable book winding through the currents, trivia and personalities that went into creating PR in this century."

"…provides practitioners, scholars, and students with a realistic inside view of the way public relations has developed and been practiced in the United States since its beginnings in mid-1900."

—What's New in Advertising and Marketing

"This book is the definitive word on the history of the field. It is thorough, well-researched, and stimulating…"

"If there is a true successor to Ivy Lee and Edward L. Bernays, who developed the public relations profession, it is Cutlip, whose PR texts have probably trained more students and practitioners than anyone else's."

"…a remarkable book….Sometimes the giants of the earth had feet of clay. But read the book. For enlightenment, entertainment, high drama, and some warts, it demands and will reward attention of the serious disciples of the unfinished profession of public relations."

"Both present and future public relations practitioners would benefit from reading this book to gain insight into the profession's culture….Cutlip has produced a rewarding work."

"…an enlightening and well-researched historical account of the birth and progress of agency public relations practice and its contribution to the development of the entire professional field."

"In describing the successes and failures of early practitioners, Cutlip helps readers better understand both the role and purpose of public relations, as well as the need for improved professionalism in its practice….a tremendous resource for public relations courses that include a history component. Those teaching the principles course particularly will welcome this detailed history of public relations."

"It is meticulously researched, reported in interesting, revealing, and instructional detail. Public relations veterans will derive a special excitement from this history as they read about old friends, pioneering heroes, and enjoy numerous discoveries. Regardless of how well informed the reader is, there will be new surprises in fact, history and commentary….Cutlip has moved us light years ahead of where we were. If you're in PR, get the book and read it….Educators are special beneficiaries: now they have a real history which will help them and their students."

"Scott Cutlip balances the contributions and the harm done by publicity. Rather than just putting these efforts to influence opinion, legislation, enforcement and desired behavior into historical context, he makes them the context itself. A lot of work and effort beyond research has gone into this undertaking."

author of The Growth of American Thought, Winner of the Pulitzer

"…a definitive and detailed history by the field's longtime leading scholar, historian, and teacher. Earlier, Scott Cutlip provided a roadmap for the field's current practice and performance. Now, he illuminates the history of public relations in a well-researched, powerful, and persuasive book."

"Scott Cutlip is the foremost historian of public relations. Most public relations scholars have been hoping for years that he would write this book. Finally it's here!"

University of Maryland at College Park

"It's [your book is] superb. If you weren't already the premier teacher of public relations in this country, your book has made you so."

"…your book will have impact well beyond the lives of either of us or even our children. After all, it is the only chronicle of public relations early days as a professional business service. I have no doubt that it will stand as a basic source a hundred or more years from now when the scholars of the day reflect on the roots of what I believe will continue to be a growing and pervasive discipline that affects all aspects of our society."