The War on Terror and the Growth of Executive Power?
A Comparative Analysis 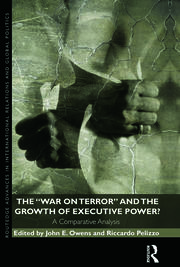 The War on Terror and the Growth of Executive Power?: A Comparative Analysis

The 9/11 attacks on New York and Washington prompted a "global war on terror" that led to a significant shift in the balance of executive-legislative power in the United States towards the executive at the expense of the Congress.

In this volume, seasoned scholars examine the extent to which terrorist threats and counter-terrorism policies led uniformly to the growth of executive or Government power at the expense of legislatures and parliaments in other political systems, including those of Australia, Britain, Canada, Indonesia, Israel, Italy, and Russia. The contributors question whether the "crises" created by 9/11 and subsequent attacks, led inexorably to executive strengthening at the expense of legislatures and parliaments. The research reported finds that democratic forces served to mitigate changes to the balance of legislative and executive power to varying degrees in different political systems.

This book will be of interest to students and researchers of Comparative Government Politics and International Politics.

1. Introduction: The "War on Terror" and the Growth of Executive Power? A Comparative Analysis John E. Owens and Riccardo Pelizzo  2. Congressional Acquiescence to Presidentialism in the US ‘War on Terror’: From Bush to Obama John E. Owens  3. Parliamentary Scrutiny and Oversight of the British "War on Terror": Surrendering Power to Parliament or Plus Ça Change? Mark Shephard  4. Putin, Parliament, and Presidential Exploitation of the Terrorist Threat Thomas F. Remington  5. Bipartisanship and Bicameralism in Australia’s ‘War on Terror’: Forcing Limits on the Extension of Executive Power Phil Larkin and John Uhr  6. Canada’s "War on Terror", Parliamentary Assertiveness, and Minority Government Jonathan Malloy  7. Israeli’s Prolonged War against Terror: From Executive Domination to Executive-Legislative Dialogue Chen Friedberg and Reuven Y. Hazan  8. Nihil Novi Sub Sole? Executive Power, the Italian Parlamento and the ‘War on Terror’ Riccardo Pelizzo  9. Reformasi and the Indonesian ‘War on Terror’: State, Military and Legislative-Executive Relations in an Emerging Democracy Edward V. Schneier

John E. Owens is Professor of United States Government and Politics at the University of Westminster, UK, and a Faculty Fellow in the Center for Congressional and Presidential Studies at the American University in Washington, DC

Riccardo Pelizzo is Research Fellow in the Centre for Governance and Public Policy at Griffith University, Australia

‘The War on Terror and the Growth of Executive Power? A Comparative Analysis is an invaluable cross-national study of the balancing of institutional forces in responding to terrorism. John Owens and Ricardo Pelizzo have brought together an outstanding array of scholars to inquire as to the institutional equilibrium as that has evolved - and the causes of it - in systems as diverse as the United States, the United Kingdom, Russia, Australia, Canada, Israel, Italy, and Indonesia. Owens and Pelizzo have assessed the institutional responses in the USA and Italy, respectively, and they have combined to write a notable introduction to this book. What is most remarkable is the range of responses that has occurred across these varied political systems as well as the frequently counter-intuitive nature of the responses. For those interested in the dynamics of comparative constitutionalism under duress and of inter-institutional relationships, The War on Terror and the Growth of Executive Power is as essential as it is enlightening.’ - Bert A. Rockman, Purdue University; co-editor of Presidential Leadership: The Vortex of Power; The George W. Bush Presidency: Appraisals and Prospects; Institutions and Democratic Statecraft; and Do Institutions Matter? Government Capabilities in the U.S. and Abroad.

‘In a timely and original book, the authors merge together two traditionally separate literatures to assess in a number of important cases the impact of extraordinary critical events, such as terrorist attacks, on the domestic relationships between the executive and legislature. The reaction of democratic institutions is brilliantly singled out and shows, contra Carl Schmitt, that critical events do not always lead to an erosion of democratic quality.’ - Leonardo Morlino, Jean Monnet Professor of Political Science, Instituto Italiano di Scienze Umane, Florence; President of the International Political Science Association, and author of Assessing the Quality of Democracy and Rule of Law and Democracy.

‘A well-focused, highly informative and nuanced comparative study of shifting executive-legislative relations during the first years of the US-led 'war on terror'. John Owens and Riccardo Pelizzo are to be congratulated for bringing together competent contributors writing on eight cases, including not only the US and the UK, but also the less frequently covered Russia, Australia and Indonesia. They help to understand why in some cases executives were less successful in loosening parliamentary controls over their often-problematic conduct. The book offers plenty of material to advance theory, but also to mount a critique of some of the excesses of executive power in response to jihadist extremism.’ - Christoph O. Meyer, King's College, London. Editor of Europe’s Response to International Terrorism and author of The Quest for a European Strategic Culture

‘Taking advantage of the research opportunity presented by world-wide terrorist attacks, this volume examines the resulting balance of executive-legislative relations through both a multi-country and longitudinal research design. While the executive gained power over the legislature in Russia, the United Kingdom, and the United States, the results were different in Australia, Indonesia, Israel and Italy. This readable set of essays on seven political systems differing greatly in constitutional structure, democratic stability and religious identities, highlights the utility of real time comparative research in a global age.’ - David M. Olson, Co-Director of the Center for Legislative Studies, University of North Carolina. Author of Democratic Legislative Institutions: A Comparative View