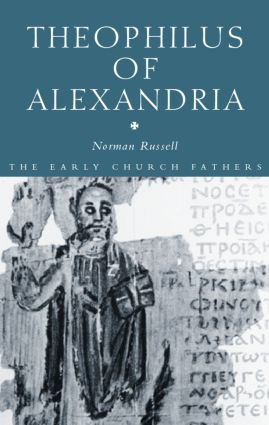 If Theophilus of Alexandria seems a minor figure today, it is because we persist in seeing him through the eyes of hostile contemporary witnesses, each of whom had his own reasons for diminishing Theophilus’ stature. In fact, he was one of the greatest bishops of the Theodosian era, who played an important role in a crucial phase of the Roman Empire’s transformation into a Christian society.

Norman Russell's new assessment of Theophilus shows him as an able theologian, an expert ecclesiastical lawyer, a highly skilled orator and, surprisingly, a spiritual teacher. The introductory section examines his efforts to Christianize an Egypt still denominated by its great temples and his battles to maintain the pre-eminence of the Alexandrian Church in an age of rapid change. The texts, most of them translated into a modern language for the first time, reveal the full power and range of his thinking.

Thoephilus of Alexandria brings back into focus a figure who has long been neglected in the study of early Christianity and will provide students and lecturers with a fresh perspective, not least through the translation of texts, for the first time, into English.

'There are many ways in which Norman Russell's virtual 'discover' of Theophilus, for the benefit of a mainstream audience, contributes to fill in gaps in our understanding of various episodes in the early Church. Russell is to be commended finally not only for providing important material for filling in these gaps, but also for convincingly presenting the complex figure of Theophilus as interesting on its own merits…Russell's own authorial voice speaks with elegant clarity, erudite and persuasive in the opening introduction, clear and fluid in the translation.' -Khaled Anatolios, Weston Jesuit School of Theology

'Norman Russell's attempt to gain him a hearing, and a sympathetic one, is…bold and original.' - International Journal for the Study of the Christian Church

The Greek and Latin Fathers of the Church are central to the creation of Christian doctrine and the establishment of the Christian Church as a social entity in the first five centuries AD. Students of theology, religion, late antiquity and the early Middle Ages constantly encounter the names of these writers; yet most of them are dauntingly inaccessible to the student because of the volume of their writings and the relative paucity of available translations.

This series makes available translations of key selected texts by the major Fathers, for the use of all students of the early church. Each volume is the work of a distinguished scholar and theologian, who has selected and translated the most representative texts of the author in question. Each volume contains a long introduction setting the subject in his historical and philosophical context, as well as a brief introduction and notes on the translations.