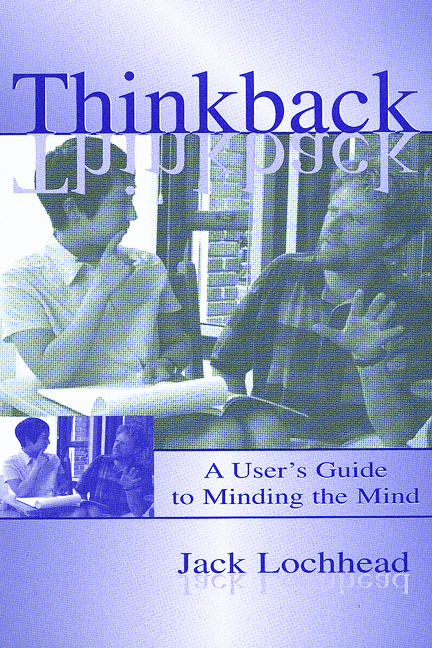 A User's Guide to Minding the Mind, 1st Edition

The fundamental premise of Thinkback--based on overwhelming scientific evidence--is that intelligence is not fixed at birth and that, with consistent effort, we can dramatically improve our capacities. It counters the claims of some psychologists that it is impossible to increase intelligence because that ability is determined at birth.

Thinkback builds on the Think Aloud strategies in Arthur Whimbey and Jack Lochhead's popular and widely used volume, Problem Solving & Comprehension, now in its sixth edition. Since its publication, thousands of students have used these techniques for improving thinking and analytic reasoning to increase test scores, win National Merit

Scholarships, and gain admission to top-ranked professional schools. Now, Thinkback shows how these powerful strategies can be applied to a range of important academic areas including mathematics, language arts, social studies, and science.

Thinkback is a tool for student empowerment--a strategy they can use to improve both their ability to think and their ability to learn. The Thinkback classroom, on the other hand, is a design for teacher liberation--enabling them to see learning more clearly than they ever could before.

This is the only book currently available that contains detailed models of metacognitive dialogues in the classroom. These dialogues enable teachers and teacher educators to observe thinking processes that have previously been invisible and undetectable. Based on over 20 years of careful cognitive research, the dialogues provide teachers with important insights into the nature of thinking and problem solving. Thinkback is a picture window on the working mind.

*Describes the Thinkback strategy for making thinking strategies explicit, easy to teach, and easy to learn.

*Includes numerous detailed examples that demonstrate the Thinkback technique. Six quite different learning strategies--derived from the work of David Perkins, Barry Beyer, Arthur Whimbey, Joseph Novak, John R. Hayes, and Lev Landa--are presented to illustrate the range of contexts in which Thinkback can be used.

*Spans the wide gap between unstructured constructivist-style instruction and lock-step memorization drills. The Thinkback technique can convert a teacher-centered rote memory lesson into an intellectually challenging student-centered exploration, while at the same time maintaining specific content mastery objectives. Or it can be used to add subtle structure to an open-ended creative exercise, allowing students of all levels to benefit and insuring that no one is left floundering.

Thinkback is an important new resource for teachers and students in high schools, community colleges, and introductory college programs; industrial trainers; home schoolers; parents; and anyone else who would like to see learners become more intelligent and are willing to work to see that they do.

"As might be expected, or at least hoped for, from someone who emphasises the importance of clear thinking, the author demonstrates his own mastery by producing a book that is a model of clarity….Thinkback--both as a book and as a process--is a valuable tool for learner empowerment."

"…the text is an excellent illustration of a simple but powerful idea thoroughly exploited in a wide range of applications. Thinkback should become an essential part of every teacher's tool kit. It has great potential for pupils with learning difficulties and able underachievers as well as all learners at some point. I shall definitely incorporate it into my Master's programmes."

—The British Journal of Educational Psychology

"Lochhead's book has been written in an intentionally jargon-free, non-academic style for an intended audience of teacher practitioners looking for alternative and progressive modes of teaching and learning. The author has devoted a major portion of his academic career to developing programs aimed at improving general anayltical reasoning skills…thus laying the ground for the insightful and experience-informed intervention presented in Thinkback."

"What a fun book to read (and informative, too, of course!)….The dialogues are wonderful and very engaging….This book will surely be just the thing to move teachers to use TAPPS. I hope more teachers try it in their classrooms."

"Knowing how to conduct metacognitive dialogues in the classroom should be a basic skill of all teachers….The application to athletics, mathematics, language arts, social studies, and science instruction adds to the strength of this book in that it demonstrates the power of the metacognitive dialogue across numerous commonly taught subjects….Thinkback should become the subject of all teacher preparation curricula and therefore this book would make a valuable addition to graduate and undergraduate courses in pedagogy, instructional strategies, and improvement of instruction. It would be of great use to staff developers who are intent on improving the quality of classroom interaction with particular emphasis on students' cognitive processes. It will be of benefit to curriculum workers as the book legitimizes the processes of thinking as the content of instruction and the subject of classroom discussion."

Codirector, Institute for Intelligent Behavior, and Emeritus Professor of Educat

"A rich and useful guide--one that will be widely welcomed and used….The inclusion of various critical thinking strategies is particularly valuable in that, all together, they provide explicit guidance for teaching critical guidance in a variety of ways and in a wide array of contexts and disciplines."

"An interesting approach to academic explication--the use of naturalistic dialogue models a powerful technique called Thinkback, while at the same time describes some of the most important instructional strategies for teaching thinking in the past 20 years."