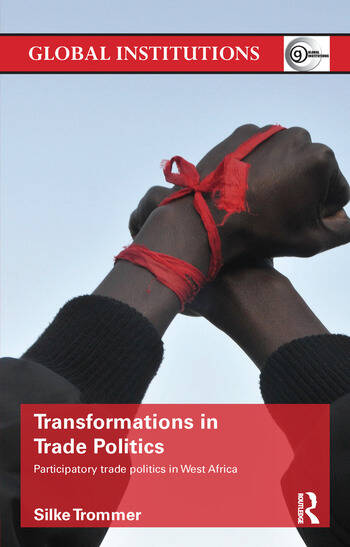 This book examines the evolution and application of participatory trade politics in West Africa and discusses the theoretical implications for political economy and global governance approaches to trade policy-making.

The author traces the involvement of a network of West African global justice Non-Governmental Organizations (NGO), local NGO and movement platforms, and trade unions in the negotiations for an Economic Partnership Agreement with the European Union. Building on this empirical analysis, she develops a theoretical framework of trade policy formation that is not limited to conceptualizing trade as a policy field aimed exclusively at regulating exporting and importing activities in the global economy. Instead, she analyzes how material and ideational spheres interact in the way in which communities set the rules that enable them to trade across long distances. Attempting to reconcile demands for inclusivity with current economic policy-making, the author reframes the way in which we theoretically pose questions of who makes trade policy decisions, through which mechanisms and why trade policy-making practices change, or resist change.

Silke Trommer is a post-doctoral researcher at the Asia Research Centre at Murdoch University in Perth, Australia, and an affiliated researcher with the Erik Castrén Institute of International Law and Human Rights in Helsinki, Finland, and the African Centre for Trade, Integration and Development in Dakar, Senegal.

'Trommer’s analysis imparts theoretical and empirical insight into free trade policies and the limits to social justice in African countries in a thoughtful, rigorous and measured manner. This study should be read by anyone interested in learning more about the relationship between trade and citizen participation in the global South.' - Susanne Soederberg, Professor and Canada Research Chair in Global Political Economy, Queen’s University, Canada.

'Silke Trommer’s meticulous analysis shows how and why civil society actors are able to influence trade policymaking. In so doing, Transformations in Trade Politics provides an important corrective to an existing body of work that tends to cast civil society influence in the field of trade as weak. This prize winning work—which draws insights from extensive fieldwork in West Africa together with theoretical innovation—is compelling and incisive throughout. A must read work for all interested in civil society engagement in processes of global policymaking, this book makes a genuinely new contribution to scholarship in the field.' - Rorden Wilkinson, Professor of International Political Economy, University of Manchester, UK, and Research Director, Brooks World Poverty Institute.

'Trommer’s theoretically sophisticated book is written with exceptional clarity. Based on solid fieldwork, she not only tells a fascinating story about the West African trade model. She also provides a persuasive analysis of the increasingly political nature of transnational trade. Most importantly, she helps open the field of global political economy to concerns of democratic participation. Now is a good time to learn from this insightful book.' - Teivo Teivainen, Professor of World Politics, University of Helsinki, Finland.

'Conventional wisdom on trade and grassroots civil society movements is either that the latter are an irrelevant nuisance or locally segmented and unable to influence the agenda of transnationally mobile elites. Trommer finds surprising results in ECOWAS and West Africa that challenge these assumptions and affirm that transformations to a more democratic world order might be possible. Drawing on impressive fieldwork and knowledge of international trade law as well as international political economy, this book delivers as a piece of critical scholarship that is very much worth reading.' - Magnus Ryner, Reader in International Political Economy, King’s College London, UK.