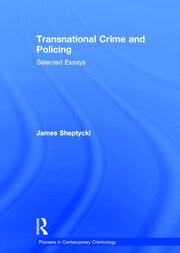 This collection of essays on transnational crime and policing covers a broad range of themes: the relationship between global policing and the transnational-state-system; the impact of advanced technologies on policing practice; the changing morphology of occupational policing subculture; and the transnational practices of police agencies. The essays include case studies and are based on empirical fieldwork that began in the early 1990s and continued for over a decade well into the post 9-11 period. This collection also provides valuable accounts of the 'secret social world' of transnational police, demonstrates that the developmental trajectory of transnational practices was already established prior to the 'age of Homeland Security' and addresses the controversial issue of how transnational policing in all of its complex manifestations might be made politically accountable in the interests of the general global commonwealth.

James Sheptycki is Professor of Criminology in the Department of Social Science, York University, Canada