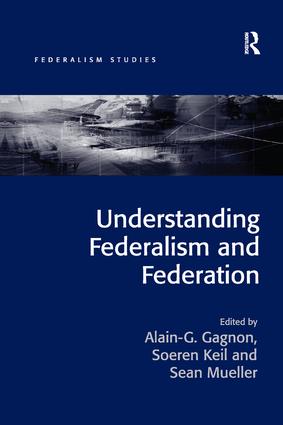 Based on a variety of contemporary debates on federal theory Understanding Federalism and Federation honours Michael Burgess’ contribution to the study of these topics through a selection of approaches, theories, debates and interpretations. Gathering contributors from diverse subfields to synthesize current debates it offers a snapshot of the immense range of current research on federalism and federation. Leading authors debate key issues such as American federalism, Canada and the role of Quebec, the latest insights into comparative federalism and federation, the European Union as a federal project and the analysis of constitutional courts in federal systems. Different theoretical and empirical fields and perspectives are brought together, synthesizing major findings and addressing emerging issues and these topics are analysed through multiple lenses to provide new insights, original approaches and much-needed theoretical and empirical data on federalism and federation.

’This book is a collection of federal wisdom. Distinguished political scientists take the reader through the fascinating journey of federalism and its never-ending intellectual challenges. Federal studies unveil an odyssey of complexity and always have the potential to surprise: this book does it magnificently, honoring a great scholar. Worth reading!’ Francesco Palermo, Institute for Studies on Federalism and Regionalism, EURAC, Italy ’Understanding Federalism and Federation is a valuable collection of essays on critical contemporary questions for the theory and practice of federalism in the 21st century. The authors are leading scholars in the field of federal studies. The essays range widely over the federal-type systems of the world, offering a cornucopia of comparative federal experience, from which fresh insights can be drawn. The book is a fitting tribute to the work of Michael Burgess, one of the foremost theorists of federalism in recent decades.’ Cheryl Saunders, Melbourne Law School, Australia

Alain-G. Gagnon is Canada Research Chair in Quebec and Canadian Studies and Professor of Political Science, Université du Québec Ã  Montréal. Member of the Royal Society of Canada, Gagnon's research and writing has concentrated on Quebec and Canadian politics, with a special emphasis on multinational federalism, nationalism, identity politics, and party politics. Soeren Keil received a Ph.D. in International Relations from the University of Kent in Canterbury and is Senior Lecturer in International Relations at Canterbury Christ Church University. His main research focuses on institutional design in post-conflict societies with a particular focus on the Western Balkans, particularly Bosnia and Herzegovina. He is especially interested in power-sharing models in divided societies, as well as forms of territorial and non-territorial autonomy for minority nations. Sean Mueller is the Editorial Assistant of the Swiss Political Science Review and Lecturer at the Institute of Political Science of the University of Berne. He is also co-convenor of the standing group on 'Federalism & Territorial Politics' of the Swiss Political Science Association (since 2011) and in the editorial board of 'Fédéralisme-Régionalisme' (since 2013). He defended his PhD thesis on explaining intra-cantonal decentralisation in Switzerland at the University of Kent in Canterbury, UK, in May 2013, and was awarded his doctorate in November 2013.

The end of the Cold War profoundly altered the dynamics between and within the various states in Europe and the rest of the World, resulting in a resurgence of interest in the concept of federalism. This shift in balance has been further fuelled by the increase in the number of conflicts arising from the disaffection of the diverse ethnic or religious minorities residing within these states (e.g. Sudan, Iraq). Globalization is forcing governments not only to work together, but also to reconsider their internal roles as guarantors of economic growth, with regions playing the major part. Federalism Studies offers academics a complete and in-depth understanding of federalism and intergovernmental relations in historical, theoretical and comparative contexts. Intended to be international and interdisciplinary in scope, the books in the series are designed to build a common framework for the constructive analysis of federalism. Contributions are welcome on topics which explore federalism as a theory; as a political system and as a form of conflict management.